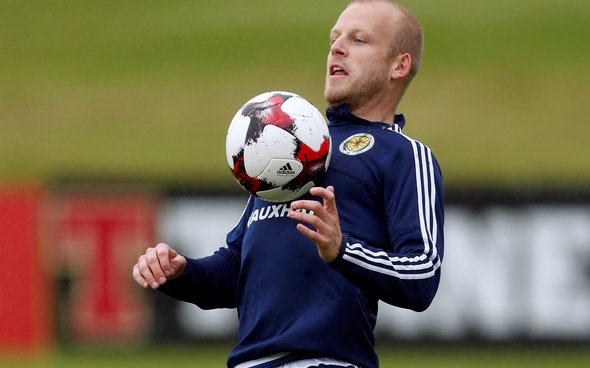 Former Premier League referee Mark Halsey has been discussing Heart of Midlothian forward Steven Naismith and his conduct during the 2019/20 Scottish Cup Final on Sunday, which Hearts ultimately lost to Celtic on penalties, as the game finished 3-3 after extra time.

During this game, Naismith got into a running battle with Hoops captain Scott Brown and the 34-year-old ex-Scotland international was accused of stamping on the 35-year-old Celtic midfielder.

Former Celtic midfielder Kris Commons has come out and criticised Naismith for his “nasty streak,” declaring that the £540k-rated Hearts man was lucky not to receive a red card for this alleged stamp on Brown and now, speaking exclusively to This Is Futbol, Halsey has shared his view on the incident, indicating that he too thinks Naismith has “got away with one” and sharing that he believes the Scottish FA will take retrospective action against Naismith, who spent five years playing for Celtic’s Old Firm rivals.

“So, there’s an argument to say that he should’ve been sent off for violent conduct stamping on an opponent so, I think he’s got away with one there. The referee’s not seen that so the Scottish FA can take retrospective action on that incident so it would be interesting to see if they do.

“I’d be very surprised if they don’t from what action they’ve taken on different players already this season so I’d be amazed if they don’t take retrospective action on that incident because, as I said, does he have to put his foot down on his leg? No, he doesn’t because there’s plenty of other places where he could’ve put it because he’s looking – he knows what he’s doing.”

Should Naismith have been sent off?

It’s been speculated that Naismith’s stamp on Brown could lead to the SFA taking retrospective action on the Hearts man and Halsey’s comments certainly lend some credence to that point of view.

Considering that Naismith’s stamp on Brown came in the first half of this fixture with the score tied 0-0, you could, perhaps, argue that if the officials had seen it at the time and sent Naismith off, it may well have significantly altered the match in the Hoops’ favour.

However, given that Celtic ultimately came away from Hampden Park with the Scottish Cup, perhaps fans of the Glasgow club won’t be too upset about that and retrospective action would be welcomed by them as it may at least give them some sense of justice over this incident.