Graham was recently hosting the latest episode of the ‘A Celtic State of Mind’ podcast and the panel discussed multiple issues involving the Bhoys. One topic of discussion was Edouard and Graham also talked about Dembele. The pundit feels that Edouard has more in his locker than Dembele but he expects them to win the Champions League in their careers.

Edouard has recently been linked with a move to Milan and Juventus. Dembele though, had joined Celtic from Fulham in the summer of 2016 but after a couple of seasons, the Frenchman left Parkhead to join Lyon (as per Transfermarkt).

Will Edouard and Dembele win the Champions League in the future? 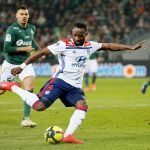 When talking about the two players, Graham said: “In my opinion, Dembele was twice the player and we only got £20 million for him. We don’t know what the sell-on clause is for Dembele yet. I think Dembele was a more complete player, but I think Edouard’s got more skills in his locker to actually go higher than Dembele.

“What I’ll actually say: I reckon Dembele and Edouard will both have Champions League winners’ medals by the time they finish their careers. I believe that.”

French football is currently facing a financial crisis and that might negatively impact Dembele’s Lyon, who reached the semi-final of the Champions League last season. The French side’s progress last season suggests that Dembele is well capable of playing at a very high level.

As for Edouard, he has been linked with a move to major clubs like Arsenal, Milan and Juventus now and that might be a reflection of the fact that he can be capable of playing at a high level too. Having said that, it is anyone’s guess if the players would win the Champions League or not but if they do, that should make Celtic fans proud.