Celtic pundit John McGinley has recently made a claim about Fraser Forster and why the Hoops might not be able to sign him in January.

McGinley was a guest on the latest video of 67HailHail’s YouTube channel and the panel discussed multiple issues involving the Bhoys. One topic of discussion was potential future transfers and one player that they focused on was Fraser Forster. McGinley believes that the Englishman won’t join Celtic in January and all the speculation is just ‘paper chat’. 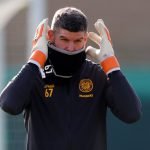 The Athletic’s Celtic-oriented journalist Kieran Devlin has previously stated that the Hoops could look to bring Forster back to Parkhead in the January transfer window. He reported that the Bhoys feel that another short-term loan deal for the Englishman can be achieved next month (as per The Athletic). Neil Lennon has previously described Forster to be a ‘brilliant’ goalkeeper.

McGinley believes that because of Forster’s rise in the pecking order at Southampton, a move to Celtic might not happen.

He said: “I like Fraser Forster but I just don’t see it happening. I’ll tell you why – he kind of moved up the pecking order at Southampton when he went back there. The season prior to us signing him, I think he featured on the bench two or three times and had one appearance – this season he’s been on the bench for every single one of their matches and Angus Gunn was the one sent out on loan to Stoke City.

“So unless Southampton are signing another goalkeeper, which probably isn’t going to happen, I really can’t see them letting Fraser Forster leave. I just don’t see it happening, it’s all a bit of paper chat, for me.”

While the Hoops failed to sign Forster in the summer transfer window, they managed to sign Vasilis Barkas from AEK Athens. Having said that, the Greek goalkeeper has struggled for the Hoops. Scott Bain did play some games in place of Barkas and Conor Hazard has come into the first-team fold too.

So Celtic clearly have as many as three goalkeeping options in the first-team right now and because of that, bringing another player in for that position might not make sense. So the Hoops should stick with what they have and not go after Forster in January.