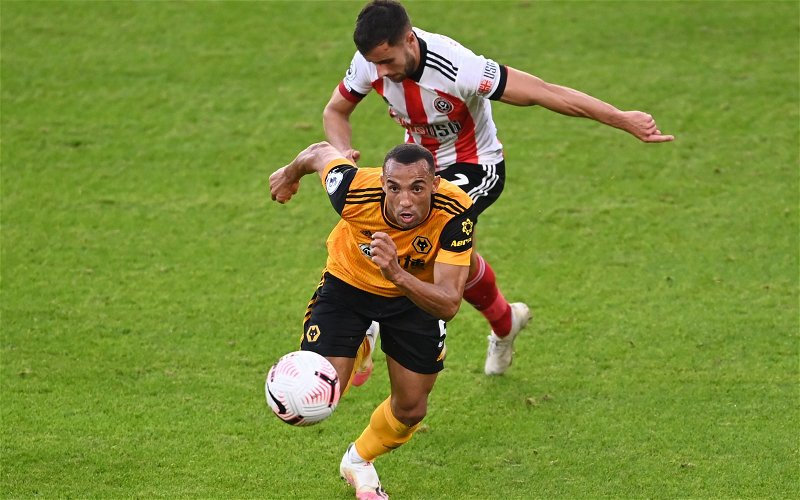 During the summer transfer window, the Old Gold sealed the arrival of the 31-year-old from Ligue 1 side Olympique Lyonnais for a £1.78m fee (per BBC).

Since then, the left-back has made six appearances for Wolves in the Premier League in which he has neither scored a goal nor assisted one for the club (per Transfermarkt).

During his latest outing for Nuno Espirito Santo’s side, the 2-1 victory against Arsenal, Marcal picked up a solid 6.90/10 performance rating (per WhoScored).

In the latest episode of The Athletic’s The Molineux View podcast, Spiers heaped praise on the defender following his latest performance for Wolves.

He said: “[He made] a couple of really important clearances. I was surprised he didn’t play against Southampton, to be honest.

“I think when you compare him to [Rayan] Ait-Nouri, he’s far more adept at sniffing out danger, [he’s] better physically as well, he looks stronger. He’s not going to do as much going forward.

“I think Marcal, hopefully, can now stay injury-free because we know that’s been an issue with him and I think he’ll really grow and blossom – he looks like he’s got all the right attributes.”

TIF Thoughts on what Tim Spiers said about Marcal…

As can be seen in what the journalist had to say, he has been impressed with the defender since he arrived at Molineux during the summer transfer window.

Have you been impressed with Marcal since he signed for Wolves?

However, while Spiers was full of praise for the Brazilian’s defensive abilities, he could perhaps be performing better in key defensive statistics.

In terms of tackles, he has made an average of just 1.0 per league outing, the same as Adama Traore and only the joint-ninth-most in the squad (per WhoScored).

The left-back has performed even worse in terms of interceptions as he has averaged 0.5 per league match, which is only the joint-12th-best in the squad.

In comparison with Nelson Semedo’s average of 1.6 tackles and 1.3 interceptions per game on the opposite side of the pitch, the Brazilian does not appear to be as impressive as his Portuguese counterpart.

With an injury-free run in the team, though, hopefully, Marcal can “blossom” as Spiers suggested he could.