During the latest round of Premier League fixtures, Nuno Espirito Santo’s side travelled to Anfield to take on Jurgen Klopp’s Reds (per BBC).

The Old Gold subsequently fell to a 4-0 defeat against the Merseyside outfit and 34-year-old midfielder Moutinho played the full 90 minutes.

For his performance in the match, Moutinho was awarded a weak 5.94/10 match rating, making him Wolves’ sixth-worst performer at Anfield (per WhoScored).

During Match of the Day 2 on Sunday night, Jenas analysed the Old Gold’s performance and slated Moutinho for his role in the Reds’ second goal.

He said: “Obviously, the finish is clinical from [Georginio] Wijnaldum, but the move from Moutinho – where’s he going? Go and press the ball.

TIF Thoughts on what Jermaine Jenas said about Joao Moutinho…

As can be seen in what the pundit had to say, he was not impressed with the Portuguese midfielder for his role in Wijnaldum’s ‘precise‘ strike for the Reds’ second goal.

Were you disappointed with Joao Moutinho's performance against Liverpool?

Yes, he was poor 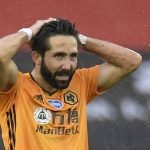 No, he wasn't bad 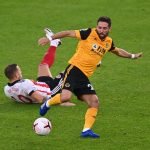 However, the midfielder’s marking was seemingly not the only area of his game that Moutinho was lacking in during the 4-0 defeat at Anfield.

During the match, the 34-year-old middleman made no key passes, made no clearances, attempted four crosses (which only one of was accurate) while failing with his one attempted through ball (per WhoScored).

So, judging from these statistics in the match, as well as considering his weak match rating of 5.94/10, it is clear that the midfielder was somewhat off his game against Klopp’s side.