West Ham United insider @ExWHUemployee has suggested that Michail Antonio may be dropped for the Hammers’ clash with Manchester United.

Back in October, the English attacker was removed early in the second half of the Irons’ 1-1 draw with Pep Guardiola’s Manchester City (per BBC).

It was then revealed by talkSPORT that a hamstring injury was going to keep the 30-year-old frontman sidelined for ‘at least a month’.

However, in the Hammers’ 2-1 win against Aston Villa on Monday, Antonio featured for 45 minutes but he delivered an unimpressive 6.58/10 match rating (per WhoScored).

During the latest episode of The West Ham Way Podcast, @ExWHUemployee revealed that Antonio was not fully fit for the game against the Villans and he may be dropped for the Red Devils’ visit. (37:35)

He said: “Antonio, I don’t think was fit for [Monday]. I think he was fit as in they declared him fit and he wanted to play but I don’t actually think he was.

“Now, I wouldn’t be surprised if he doesn’t play on Saturday. As I said earlier, it would depend on whether he was fit or not.

“I will say, I don’t think he [will] start on Saturday but we shall find out I guess. I wouldn’t be surprised if [David Moyes] goes for four at the back as well but that’s a guess.

“I think Antonio, I would say, is unlikely to start on Saturday but that isn’t confirmed either way.

(40:31) “It’s a shame that Antonio’s a doubt but if [he] is a doubt, he’ll only miss this game. I would say it would be one more game and then they’ll get him back to fitness to start playing again.”

As can be seen in what the in-the-know podcaster had to say, it seems that the attacker is still somewhat struggling with the hamstring injury that forced him off against City.

If Michail Antonio is not fully fit but can play, who would you rather started against Man United? 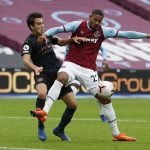 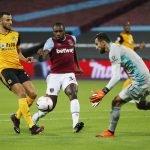 Hopefully, for the Hammers can get Antonio ready in time for Man United as he has been their second-best player in the Premier League this season (per WhoScored). Having bagged three goals in seven top-flight appearances this term, the 30-year-old attacker has earned an impressive 7.12/10 average rating. And, his three goals account for 17% of the club’s overall amount of goals in the top-flight so far this season. Plus, Antonio’s potential replacement, Sebastian Haller, has only managed to bag two goals in nine Premier League appearances so far this season.

So, if the player is absent for the visit of Ole Gunnar Solskjaer’s side, he will likely be a big miss for Moyes and the Hammers.