West Ham United insider @ExWHUemployee has recently claimed that the availability of Napoli striker Arkadiusz Milik has “been made known” to the Hammers.

Heading into the January transfer window, the striker position would appear to be one that is in need of recruitment for David Moyes.

Currently, the former Manchester United gaffer has just two out-and-out strikers at his disposal in Sebastien Haller and Michail Antonio (per Transfermarkt).

With Haller having netted just three goals in 15 league games this season and Antonio having recently struggled with injuries, it seems possible that a new striker may be a January target.

During the latest episode of The West Ham Way Podcast, @ExWHUemployee discussed possible transfer options up front and made a claim regarding Milik. (1:02:27)

He said: “These players’ availability has been made known to us – players that we could realistically go for.

“Milik at Napoli, the Polish international forward. [He’s] struggled there a little bit, although he has got quite a good goals-to-games ratio still.

“He is someone who is a potential signing.”

TIF Thoughts on what @ExWHUemployee said about Arkadiusz Milik…

As can be seen in what the in-the-know podcaster had to say, he believes that Milik’s availability “has been made known” to the Hammers and they “could realistically go for” him.

Would you be happy if West Ham signed Arkadiusz Milik? 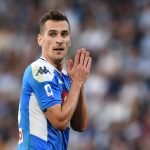 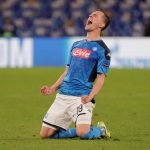 So far this season, the 26-year-old striker has not made a single appearance for Napoli, however, last season he bagged 11 goals in 26 Serie A outings (per Transfermarkt).

In total for his Italian outfit, Milik has made 122 appearances, in which he has managed to find the back of the net on 48 occasions and provide five assists for teammates.

With his contract set to expire next summer and a market value of £19.8m, too, he may be relatively affordable if the Hammers do actually have an interest in signing the striker.