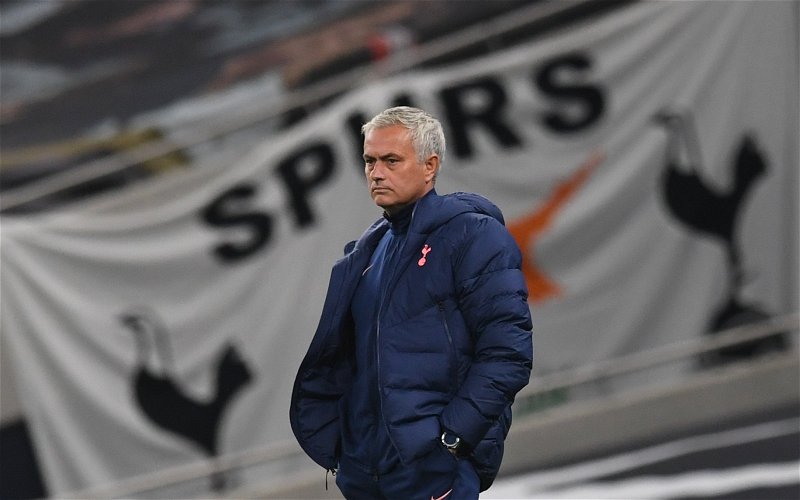 A lot of Tottenham Hotspur fans have been reacting to a tweet that was recently posted by Spurs-focused Twitter account @thespursweb which shared the latest image that Lilywhites manager Jose Mourinho has posted on his Instagram page.

This post was made after Spurs suffered a 2-1 Premier League loss to Liverpool on Wednesday evening. The image that the Portuguese manager posted showed him sitting in the dugout in the 63rd minute, reacting to Steven Bergwijn hitting the post.

The image is captioned with the words: “The moment the post denied us the victory we deserved. Proud of everyone.”

Jose Mourinho via Instagram: "The moment the post denied us the victory we deserved. Proud of everyone. COYS." pic.twitter.com/jP1yl8WMEs

Some of the Spurs supporters who replied to @thespursweb’s tweet speculated about what Mourinho said and did in the away dressing room at Anfield after this game, with Bergwijn, who spurned multiple chances in the second half on Wednesday night, potentially in the firing line. Meanwhile, other Tottenham fans replied to this post to share some optimism about how their players will react to this defeat.

That’s the last we see of bergwijn then https://t.co/3yYTTnkGUX

Knowing Jose, I imagine he must have wreaked havoc in the changing room before posting that lol

Can’t wait for furious Jose fully taking over his spirit. We won’t lose another game this season ?

He’s not wrong. I know its tough but we all need to pick our heads up and support the team. Big game on sunday

Are you proud of Tottenham's players for their performance at Anfield?

We had the better chances, and they had more possession, i wouldn’t say we deserved the win if we had it. Kept giving the ball away quite alot, and struggled getting it back, but we move on and learn from this. COYS.

All in all, it’s clear that Mourinho’s Instagram post has sparked plenty of discussion amongst fans of the north London club.