During yesterday’s 2-0 victory over Mikel Arteta’s Arsenal, the 23-year-old middleman played no part for Jose Mourinho’s side (per BBC).

The last outing which Ndombele made for the north London club was on Thursday night in the Europa League tie against Austrian side LASK (per Transfermarkt).

Prior to kick-off with the Gunners on Sunday, Gold revealed that the Frenchman was missing the derby as he had a ‘minor problem’ and ‘couldn’t recover in time for the game’ (per Alasdair Gold).

The Evening Standard also shared Mourinho’s confirmation that the midfielder had ‘ruled himself out’ on Sunday morning, with the former Lyon man reportedly ill.

After Gold broke the news on Twitter, lots of Spurs fans flocked to it to air their fury.

So, what did these Spurs fans have to say about Alasdair Gold’s tweet on Tanguy Ndombele?

Tanguy Ndombele misses out with a minor problem. Couldn’t recover in time for the game today.

Utter stupidity from Jose playing him in that Europa game….beyond gutted.

During the 3-3 draw away from home against LASK on Thursday night, Ndombele featured for 65 minutes and bagged an assist for Spurs.

Was it a mistake by Jose Mourinho to play Tanguy Ndombele against LASK?

Yes, it was a mistake

No, it wasn't a mistake 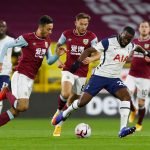 Mourinho has made a big mistake playing him Thursday ?????

Massive risk that was playing him Thursday

So far this season, Ndombele has made 10 appearances for Spurs in the Premier League, in which he has bagged one goal and provided one assist (per WhoScored).

His performances in the 10 outings have earned the midfielder a fairly solid 6.79/10 average rating, making him Tottenham’s ninth-best performer.

Therefore, you can see why so many fans were upset at the news, not that it hindered Spurs too much as they defeated north London rivals Arsenal without Ndombele’s assistance.

not fit enough even for the bench. That’s worrying https://t.co/cVMxAwmLrr

As can be seen in these responses from Spurs supporters, many of them were not happy with the news on the French middleman, which perhaps suggests just how vital to the team he is perceived to be by the club’s supporters.