Many Tottenham Hotspur fans have been discussing a transfer news update involving Gianluigi Donnarumma that was recently shared on social media.

Sources from Spain have recently linked Spurs with a move for Milan goalkeeper Gianluigi Donnarumma. The report claims that Spurs and PSG are two teams that are interested in signing in the Italian goalkeeper and the Lilywhites see him as a long-term replacement for Hugo Lloris. 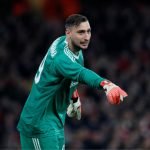 A tweet about this update was relayed on Twitter by the Spurs Express recently and it got many Spurs fans talking.

What did Tottenham fans make of this update about Gianluigi Donnarumma?

Shut the front and back door!! ? I’ve been saying this for about 3/4 years now we should definitely go after GG ? would be an amazing replacement

YES! This is the man to take us to the next level! If we can get him on a free or a tribunal then get him!!

No way we get him tbh

Donnarumma is a product of the Rossoneri youth academy and has been a regular for Stefano Pioli’s men this season. The Italian has made 16 appearances in all competitions, while keeping five clean sheets so far (as per Transfermarkt).

His agent Mino Raiola has already confirmed that there are clubs who are looking to sign him but he refused to give too many details about a potential contract renewal for the young goalkeeper.

The rumour linking him with a move to Spurs caught the attention of some other fans too.

That would be awesome…..

I always see him as an ideal Lloris replacement in the future. Been superb since his debut years ago. https://t.co/8Scu5I1Om3

Been screaming this for years https://t.co/YIZBgmL6gO

He’s one the worlds best. Would be a massive signing. Sooo, not gonna happen.

Some of these Spurs fans would like Donnarumma at Spurs, while others don’t feel confident that the Lilywhites can sign him.

The 21-year-old Italian has overperformed on his post-shot XG metric consistently over the last three seasons and it shows that he is a very good shot-stopper (as per FBRef).

He is still 21 and might still improve in the future. So if Spurs do get the chance to sign Donnarumma, they should try their best to get him.