Southampton: Martin Semmens provides update on any potential takeover of the club | thisisfutbol.com

Southampton: Martin Semmens provides update on any potential takeover of the club

Martin Semmens, the chief executive of Southampton, has been speaking on an online fans’ forum for the Saints in which many Saints fans were allowed to ask their questions to a panel that consisted of Semmens, manager Ralph Hasenhuttl, and managing director Toby Steele.

One question which came up was over any potential investment or a full takeover of the Saints after Joseph DaGrosa was linked with a bid for the club earlier this year.

However, Semmens dismissed the idea that anyone was interested in the club, and insisted that 99% of what is heard in the media is not true.

He said: “I would say 99% of what you see in the media is not real. Certainly, most of the names that have come up, I have never heard of and [it’s] the same with player trading.

“You just have to understand and respect that those things aren’t true, and all we can say is when something does change, we will tell you about it.”

Are you happy with this? 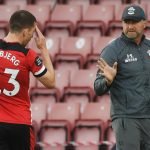 This seems to be pretty dismissive stuff from Southampton’s chief executive, which would suggest that the reports linking DaGrosa to the club are not true.

With the Saints sat in fifth place on 20 points and Hasenhuttl as manager, we would argue that the current regime is doing just fine.

If new owners were to come in to take over the Saints at some point, they might not actually be the best thing for the club, especially if they decided to get rid of Hasenhuttl, for example.

We certainly found it refreshing that Semmens put an end to these reports linking a new investor with Southampton, and it is fantastic to see him communicate with the Southampton fans and let them know exactly what is going on.