Newcastle United: Fans fume at the display of Sean Longstaff

A lot of Newcastle United fans have flocked to comment on the performance of Sean Longstaff during the Toon’s 5-2 thrashing by Leeds United at Elland Road.

The 23-year-old played the full game and earned a pitiful rating from The Chronicle, and these Toon fans were fuming.

What did these Newcastle fans think of Longstaff’s display?

#nufc dreadful performance. And what has happened to Sean Longstaff?

Sean Longstaff for me would be an easy minus 73 he was THAT bad.

How woeful is Sean Longstaff man

Were you happy with Longstaff's performance?

No, he was pathetic 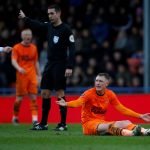 Yes, he wasn't that bad

This was Longstaff’s ninth Premier League appearance of the season, but he never got going and was partly at fault for the third goal as he waited on the ball too long in his own penalty area.

Longstaff was once hailed as the next Michael Carrick, but this was a poor performance from him, and these Toon fans were not happy.

Death, taxes and Sean Longstaff losing the ball in his own half. #nufc

That was pretty disgusting Nufc. Sean Longstaff should be sent back to Northshields if they’d take him.

After playing that badly, we would be surprised if Longstaff starts against Fulham on Saturday.

Considering Jonjo Shelvey was an unused substitute, you would think that he could come into the side for that game against Scott Parker’s men.

After that match, the Toon play Manchester City, Liverpool, and Leicester City in the league, so you would think they could do with a win against Fulham, and it will be interesting to see if Longstaff is involved or not.