Leeds United: Plenty of supporters left in disbelief as some players miss out on TOTW honours | thisisfutbol.com

Leeds United: Plenty of supporters left in disbelief as some players miss out on TOTW honours

Leeds United fans have been rejoicing at the news that a number of players have been selected in the WhoScored.com Team Of The Week.

It was probably going to be inevitable that a number of them would end up there, given the way that they completely tore apart West Bromwich Albion at the Hawthorns. And when you add to that the fact they were the only team in the latest round of matches to score more than one goal in their game, it was probably going to take some special performances from players in other teams to even get a sniff.

So whilst there was cause for much celebration amongst the Leeds United ranks to see so many of their players involved, there were a couple that felt a few of other players could and should have made the team as well:

“Not bad for a team who is going down”

@holtdaniel123
“Raph and Dallas been done dirty here”
@aimzk1990
“May as well just put all our team in there”
@MissVJFxx
“Where’s Dallas, Meslier, Klich, Raphinha and stuijk”
@lufc_fc
“That’s decent but pretty harsh on Raphinha and Dallas”
@bethgabriel_
“Only 6!”
@rico74leeds
“Only six… scandalous”
@CraigLUFC77
“Is this a joke Merson is fuming ha #LUFC #MOT #BielsaBall”

Could Leeds United challenge for a spot in Europe? 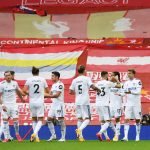 Now given that this is based on what they scored based on the metrics of the website, it’s not that straightforward, otherwise I don’t think it would have been inconceivable to put the whole starting eleven in there. Maybe some other time though, given some of their results and displays this season, you wouldn’t put it past them.