One of the topics that he spent some time on was Rodrigo and his lack of game time in the Whites’ last two Premier League fixtures against Arsenal and Everton.

Both against the Gunners and the Toffees, Rodrigo started on the bench and came on as a substitute for 20 minutes and one minute respectively, which is not a lot of game time for someone who cost £27m in the last transfer window.

However, Hay doesn’t seem to think Rodrigo will start against Chelsea either.

He said: (6:43) “Rodrigo, I think, [has] had some very impressive games, but hasn’t yet had that long streak of matches where it feels like he is fully established.

“I think without wanting to tempt fate it seems likely that it will be [Stuart] Dallas in there against Chelsea because there won’t have been anything that Bielsa has seen in the Arsenal game or the win at Everton that’s going to persuade him in any great degree to change things.”

Do you think that Rodrigo should start against Chelsea?

No, use him as an impact player 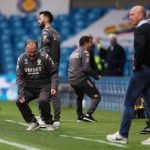 Yes, we should start him

TIF Thoughts on Rodrigo and his lack of game time…

In one of those games against Arsenal, Stuart Dallas played in midfield, and he turned in a performance of 6.79.

Then in the other game against Everton, Jack Harrison played in the centre instead of on the wing, and he turned in a performance of 7.19, so you can see why Rodrigo might not get back in the team yet.

However, given the money spent on Rodrigo and the odd game where he has shown his potential, we feel that it won’t be too long before the 29-year-old is back in the starting XI.

We do, though, understand why Bielsa might not want to make too many changes to a team that have kept back-to-back clean sheets ahead of a trip to high flying Chelsea.