Some Leeds United fans have been reacting to a post from Whites-focused Facebook page Leeds United Live which relayed a report sharing Brighton and Hove Albion manager Graham Potter’s recent comments on the possibility of Seagulls centre-back Ben White “getting his head turned.”

It was claimed earlier this week that White, who spent the 2019/20 season on loan at Leeds from Brighton and played every minute of the Whites’ title-winning Championship campaign last season, has attracted interest from Manchester United, Tottenham Hotspur and Chelsea, with the three clubs said to be monitoring the 23-year-old’s progress.

However, despite allegedly attracting plenty of interest, White’s head is unlikely to be turned, according to Potter, who dismissed uncertainty over his player’s future.

After Leeds United Live relayed Potter’s latest comments on the £13.5m-rated man on Facebook, many Whites fans commented on their post.

So, how did these Leeds United fans react to this post about White? 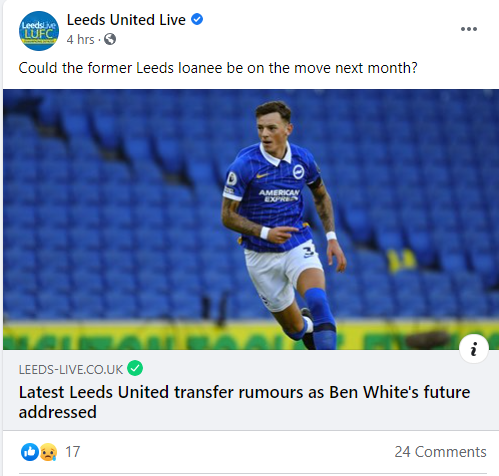 After the centre-back played a significant role in Leeds’ title-winning Championship campaign last term, Marcelo Bielsa’s side bid as much as £25m to try and secure his signature on a permanent deal in the summer, but Brighton retained the defender’s services.

However, plenty of Leeds supporters indicated that they would like their club to go back in for White in January in response to this post.

Some Whites fans, though, shared that they wouldn’t like to see the 23-year-old back at Elland Road and called for their club to move on.

Would you take White back at Leeds?

So, while reactions were mixed, plenty of Leeds supporters certainly seem to still have hope that White will return to Elland Road in the future and given that only four Leeds players earned a higher overall WhoScored rating than him (7.09) in the league last season, that’s hardly a major surprise.