Supporters of Leeds United have recently reacted to a report which has emerged regarding a potential successor to Marcelo Bielsa.

According to a recent report by Leeds Live, Elland Road has previously been put forward as a potential destination for Steven Gerrard, should Bielsa leave the club.

The report from Leeds Live carried a link to a piece by The Athletic in which the Englishman discussed his future and claimed to have no plans beyond the Gers.

He said: “I’ve got no targets, no plan in terms of how long I want to do it for. But this is no stepping stone for me. I’ve got no plan beyond this contract.

“I haven’t got my eyes on anywhere else. I’ll be judged on success and I’ll probably make decisions depending on how it goes.”

This was shared to Leeds supporters on the Leeds United Live Facebook page and it had lots of them talking.

So, what did these Leeds fans have to say regarding the report on Steven Gerrard? 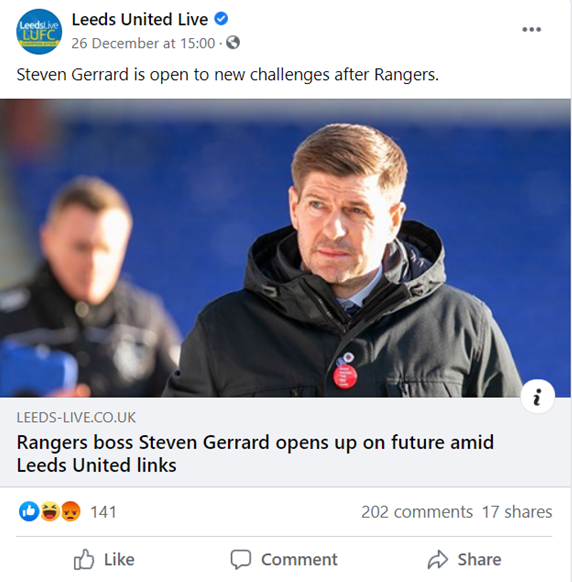 The 40-year-old manager has been situated at Ibrox since the summer of 2018 and his existing deal with the Scottish Premiership outfit runs until May 2024 (per Transfermarkt).

Would you like Steven Gerrard to manage Leeds United one day?

No, I don't want him

Yes, that would be good

During his time with the Gers, Gerrard has overseen 145 matches, of which 94 have been won, 31 have been drawn and 20 have been lost – leaving him with an impressive points-per-game tally of 2.16.

However, despite having been with the club for over two years now, the retired midfielder has not led Rangers to any silverware as of yet.

As can be seen in these responses from Leeds supporters, many of them were not keen on the idea of Gerrard taking the reins from Bielsa at Elland Road.