Many Leeds United fans have been commenting on a Facebook post that was recently made by Whites-focused Facebook page Leeds United Live which shared a report discussing the possibility of Marcelo Bielsa’s side making a move for Manchester United goalkeeper Dean Henderson.

This report relays some comments that were made by Tim Sherwood, who recently appeared on Sky Sports, as per HITC, and claimed that the £18m-rated Manchester United goalkeeper, who has made just five first-team appearances for the Red Devils this season, should look for a move away from Old Trafford to get more game time under his belt.

With Leeds having previously been named as one potential destination for the 23-year-old, this Facebook post from Leeds United Live relaying this report caught the attention of plenty of Whites fans who have been sharing their thoughts on the possibility of their club making a move for their bitter rivals’ academy product.

So, what did these Leeds United fans have to say about the possibility of their club targeting Henderson? 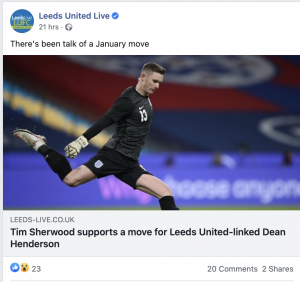 While one particular Whites fan indicated that they would like to see Henderson at Elland Road, many of the Leeds fans who replied to this tweet shared that they’d like to see the Yorkshire club steer clear of the 23-year-old, with some Whites fans stating that they don’t think a new goalkeeper is needed at present.

Would you take Henderson at Elland Road?

So, while Henderson is a highly-rated stopper, it would appear as though plenty of Leeds fans are not so excited about the idea of the 23-year-old joining their club.