Supporters of Leeds United have recently reacted to a claim which was made by Darren Bent regarding Kalvin Phillips.

On Monday, the Yorkshire Evening Post ran a piece which carried quotes that had been made by the retired striker in which he discussed the English midfielder.

The pundit was speaking on Sky Sports and Bent claimed that Phillips “protects the back four really well” and that “his range of passing is absolutely superb”.

Bent then went on to tip a big club to “come calling” for the Englishman, saying: “I think he signed a new contract not so long ago. But some of the big boys are going to come calling. They have to because he has been that good.”

This report was then shared on Facebook by the Yorkshire Evening Post and it had lots of fans talking.

So, what did these Leeds fans have to say on what Darren Bent said about Kalvin Phillips? 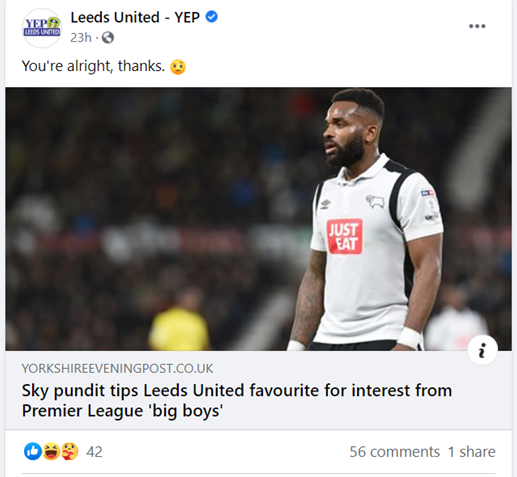 Phillips currently has until the summer of 2024 left on his contract at Elland Road and a market value of £19.8m according to Transfermarkt.

Do you think Kalvin Phillips would stay at Elland Road if a big club bid for him?

No, he wouldn't stay

Yes, he would be loyal

So far this season, the 24-year-old midfielder has made seven Premier League appearances for the Whites in which he has provided one assist (per WhoScored).

Over those seven outings, the player’s performances have earned him a solid 6.97/10 average rating which has made him the third-best performer in the league in Marcelo Bielsa’s squad.

As can be seen in these responses from Leeds fans, many were confident of Phillips staying with the Whites, however, one fan noted that ‘no one is safe’ when there is ‘enough money talking’.