Many Leeds United fans have been discussing a transfer update that has linked them with a move for Fiorentina duo Erick Pulgar and Christian Kouame. 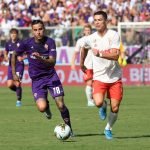 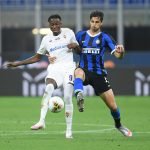 This update was relayed on Twitter by journalist James Marshment and it drew the attention of many Leeds fans, who began discussing the transfer news.

What did Leeds fans make of this update involving Erick Pulgar and Christian Kouame?

“I like the sound of both of them, we definitely need to bolster our forward line for long term, if Paddy gets injured, our resources are bare, I’d love a creative attacking midfielder too, Eriksen would be a cheeky loan option maybe”

“I cant see either of those happening. Maybe pulgar in the summer all goin well.”
Credit: @dazgrimmer
“2 goals in 22 appearances, eh, sounds like a cracking striker”
Credit: @thombo1987

Credit: @C82Chris
Kouame had joined Fiorentina from Genoa on initial loan deal in January 2020, but he arrived at the Stadio Artemio Franchi on a permanent basis in the summer of 2020. As for Pulgar, he joined Fiorentina from Bologna in the summer of 2019.
Kouame has one Serie A goal this season, while Pulgar has made ten appearances from the midfield for La Viola. Some other Leeds fans also discussed their club’s links with the Fiorentina duo.
“Would have Costa rather than this unknown who is a striker who doesn’t seem to score.”
Credit: @DBauer191
“Good job we’re normally so clinical.”

“Both are mainly right footed can’t be true”
Credit: @GlenH84
A lot of Leeds fans are mocking Kouame’s abilities and don’t seem to want the Ivorian to end up at Elland Road.
The 23-year-old though, had contributed to nine goals for Genoa in the 2018/19 Serie A season. He had contributed to eight goals in 11 appearances in the 2019/20 campaign (as per Transfermarkt), before he had sustained a knee injury which kept him out for over 200 days.
So his poor record this season might have been impacted by the long-term injury that he had faced last year. And considering his record in the 2019/20 campaign, he might yet prove to be a good signing for the Whites.