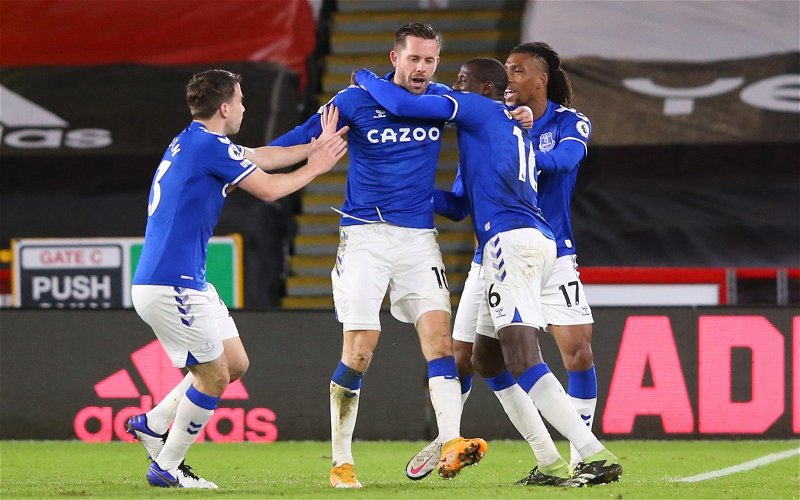 Speaking recently on The Gab & Juls Show, Gabriele Marcotti discussed Everton’s performance in the Premier League so far this season, and whether or not he believed they can maintain their lofty league position.

After a summer transfer window which saw the arrivals of Ben Godfrey, Allan, Abdoulaye Doucoure and James Rodriguez, Carlo Ancelotti’s side got off to a flying start in their 2020/21 Premier League campaign, remaining unbeaten over their first five league fixtures, with a record of four wins and one draw.

And, after the Toffees endured a slight dip in form over their next five league games, losing four and winning one of their fixtures, the 61-year-old Italian boss seems to have steadied the ship once more, as the Blues are once again unbeaten in their last five league games, picking up impressive victories against the likes of Arsenal and Chelsea along the way.

However, speaking on a recent episode of The Gab & Juls Show, Marcotti questioned whether Everton could maintain their fine form over the rest of the season.

In response to a question asking whether Everton could remain towards the top end of the table, in which they currently sit fourth, Marcotti said:

“If you’re asking can they stay second at the end of the year? No, I really, really don’t. However, this is pretty remarkable. This is the run where they were supposed to be dropping points and falling behind, but the run of games that they’ve had before this and yet, they’re right up there.

“I think it tells you – when you only beat Sheffield United 1-0 – no disrespect to Chris Wilder – you’re not at your best. But, you know, he’s using the whole squad – Anthony Gordon, he’s gone with four centre-backs. So, you know, it’s rolling along but the test will come when everybody’s fit again.”

Do you think Everton can finish in the top four this season?

While Marcotti does praise Everton for the results they have picked up so far this season, he also seems to believe that Ancelotti’s side will struggle to maintain their position in the top four come the end of the season.

However, with the league so tight at present – with just four points separating second-placed Manchester United and ninth-placed Southampton – in our opinion, this season, more than any other, presents Everton with a viable shot at Champions League qualification, and perhaps even the league title, as any run of decent form can catapult a team towards the top of the table.