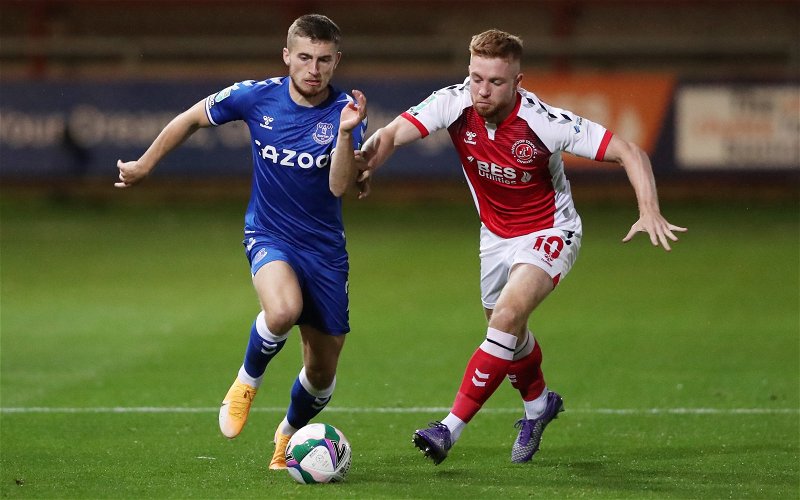 During the latest round of Premier League fixtures, the Toffees hosted Frank Lampard’s Blues at Goodison Park and a Gylfi Sigurdsson penalty sealed a 1-0 victory (per BBC).

Against Chelsea, not only was Kenny included in the matchday squad, but he was also brought on as a late substitute at left-back.

So far this season, the 23-year-old defender has only made two appearances in the league for Carlo Ancelotti’s side and he has been left out of the matchday squad in seven of Everton’s 12 league games.

In the latest episode of the Liverpool Echo’s Royal Blue: The Everton FC Podcast, Prentice discussed Kenny’s inclusion against the Blues and claimed it came as a “surprise”. (30:26)

He said: “We spoke about Jonjoe in the podcast [at] the tail-end of last week and we all effectively wrote-off his Everton career by saying that Carlo clearly doesn’t fancy him.

“We suggested that by playing so many other players in that position, instead of an actual proper right-back – a man who plays there week in, week out as his regular position – the writing almost appeared to be on the wall.

“So, it was a real surprise to see him involved at the weekend and to bring him on as well, I know it was only for a couple of minutes, suggests that maybe we were jumping the gun a little bit.

“Maybe Carlo doesn’t tend to use him and why he hasn’t, I don’t know but the fact that he’s brought him on [means something].

“When a manager brings a couple of players on towards the end of the game, obviously it was a bit of a spoiling tactic to try and break up the game, but also, I think it just integrates players again because he’s got the intention of using them again in the near future.”

TIF Thoughts on what David Prentice said about Jonjoe Kenny…

As can be seen in what the journalist had to say, he felt that it was a “surprise” to see the English defender involved against the Blues on Saturday.

He also felt that perhaps it could mean that Ancelotti has the intention of using Kenny more often in the “near future” despite the writing having “appeared to be on the wall”.

Would you like to see Jonjoe Kenny getting more minutes for Everton going forward?

Over his two appearances for Everton in the league this term, Kenny has delivered an unimpressive 6.08/10 average rating, making him the second-worst performer still in the squad (per WhoScored).

So, hopefully, if Kenny is to get more minutes for the Toffees going forward, he can deliver improved performances to stake a claim for a more prominent role in the side.