Making his West Ham debut as an 18-year-old back in 2017, Rice has so far gone on to feature 121 times for the Hammers, chipping in with three goals and providing five assists along the way.

So far this season, the £49.5 million-rated defensive midfielder has highly impressed for David Moyes’ side, making an average of 1.7 tackles, 2.3 interceptions and 1.1 clearances per game over his 11 Premier League appearances, culminating in an average WhoScored match rating of 6.99 – ranking him as the club’s fourth-best player in the top flight.

Reports over the summer transfer window suggested that Frank Lampard was extremely interested in the idea of bringing Rice to Chelsea, however, with West Ham reported to have been demanding a fee of £80 million for the midfielder, he ended up staying put in east London.

And, speaking to This is Futbol, Harewood heaped praise on the 21-year-old, stating his belief that Rice is worth an extremely large transfer fee.

“I wish I was playing now, with the price tag of people. If someone’s putting like a £50 million [price tag] or whatever you put on him, he’s one of [those] players I would say, ‘Yeah, he’s worth that’. His mannerisms and how he is as a person, and how he is on the pitch. I would definitely back him for that sort of money.”

Do you think Declan Rice will sign for Chelsea during the January transfer window? 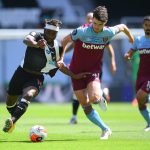 Yes, I think he will do 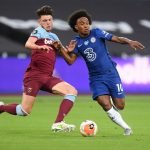 Considering the fact that Rice is in the top five average interception makers in the Premier League so far this season, of players to have played a greater number of games the average number of appearances in the top flight, in addition to the fact he ranked eighth in average interceptions made as well as fifth in average tackles made under the same criteria last term, it is not difficult to see why Harewood is of the belief that Rice is worthy of the lofty price tag West Ham would demand for his services.