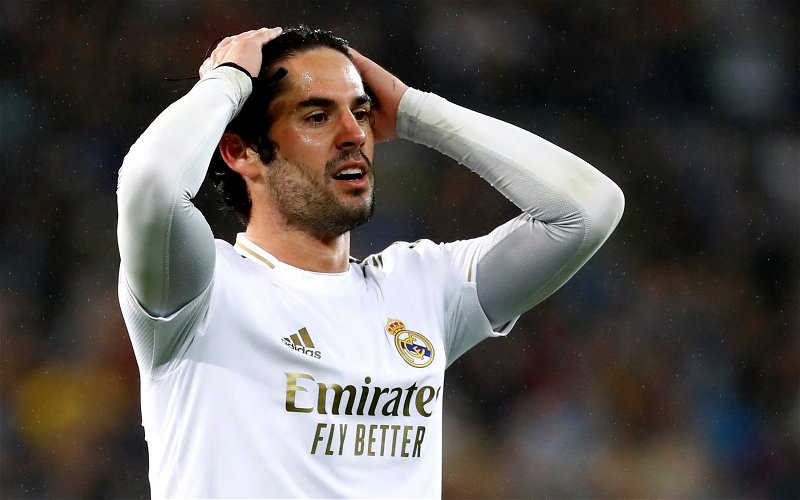 Arsenal journalist Charles Watts has been sharing his thoughts on the transfer link between the north London club and Real Madrid midfielder Isco.

This comes after Watts recently uploaded a video onto his YouTube channel where he spoke about a number of talking points surrounding Mikel Arteta’s side.

After it was recently reported (as per PA Sport via Daily Mail) that Arsenal are targeting a loan move for Isco in the upcoming January transfer window, Watts had this to say on the matter.

He said: “It’s always been one that does make sense this one for me. Isco wants minutes, he’s got [the] Euros at the end of the season, [he’s] not really getting any starting time under [Zinedine] Zidane at Real Madrid, Arsenal want a creative player who can come in and help fix the creativity problems they’re struggling with this season, so it’s always one that makes sense and whether Arsenal can get this one done in January we’ll have to wait and see.

“My opinion on it is if it’s a loan deal I’m not too bothered, I just don’t want Arsenal signing Isco at the end of this. I don’t want to give a 28-year-old a big-money contract, which would probably be his last contract, he’s just not the right age for me.

“I even think in [a] January loan [deal], I’m not too convinced about it.”

Isco signed to Real Madrid back in the 2013 summer transfer window from fellow La Liga side Malaga for a fee of £27 million.

Since then, the 28-year-old, who is currently valued at £18 million, has made a total of 318 appearances for the club in which he has managed to score 51 goals and provide 55 assists along the way (per Transfermarkt).

With Arsenal having only managed to score 16 goals in 16 league matches so far this season, maybe adding someone like his Isco with his record of goals and assists under his belt, could benefit the team in front of goal.

Would you take Isco at Arsenal in January?

However, with the Spaniard having only managed to provide one assist and earn himself a fairly uninspiring season rating of 6.35/10 prior to their midweek league clash against Elche, this suggests to us that Isco may not be the best option for Arsenal at this moment in time.