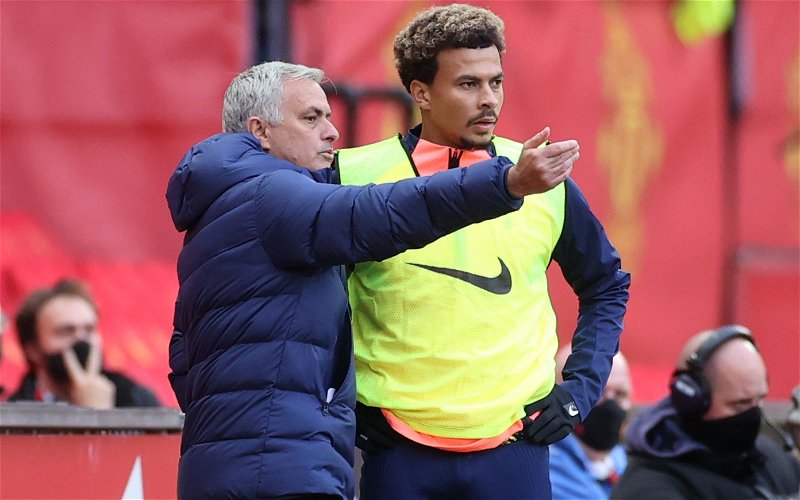 Speaking on a recent episode of the Football Writers Podcast, Ade Oladipo stated his belief that Tottenham Hotspur midfielder Dele Alli needs to leave the club as he doesn’t fit into Jose Mourinho’s plans.

Since moving to Spurs from Milton Keynes Dons in what was a £5.97 million deal back in 2015, Alli has gone on to feature 228 times for the north London side, scoring 63 goals and providing 55 assists along the way.

However, so far this season, the £46.8 million-rated 24-year-old has featured for Mourinho’s side just twice in the Premier League, being substituted at half time in the club’s 1-0 loss to Everton, and featuring for 21 minutes in their 6-1 victory over Manchester United at Old Trafford.

Aside from these two fixtures, the England international has not been included in any other of Tottenham’s matchday squads in the Premier League.

As a result of this lack of top-flight game time, Oladipo stated his belief that Alli should leave the club in the near future in order to play more regular first-team football, as well as the fact that he doesn’t feel the midfielder currently fits into Mourinho’s plans at Spurs.

He said: “He’s only 24 – even if it’s just a loan deal, you look at what Ross Barkley did in leaving Chelsea, he’s come on leaps and bounds at Aston Villa – I think Dele Alli should look to do the same thing.

“I think he needs to go. There was talk about [Alli moving to] PSG, a lot of people laughed at that. He could possibly go [to] PSG. If Moise Kean can go PSG, there’s a good chance Dele Alli can go PSG and get some minutes somewhere.

“But he does need to get out [of] the game, he does need to leave the club. He clearly isn’t the Dele Alli of 2016/17,  that scored 22 goals and [in] 2017/18 he got 14. He needs to move and just find pastures new because I don’t think he fits exactly what Mourinho wants to do. Mourinho likes men, he likes having big men [who are] leaders on the pitch [and] I don’t think Dele Alli fits that right now.”

Do you think Dele Alli should leave Spurs in January?

From Oladipo’s comments, it is clear that the journalist is of the belief that Alli does indeed need to secure a move away from Tottenham in order to start playing first-team football regularly, as he seems to suggest that the 24-year-old is not currently in the plans of the Spurs boss.

However, there has been evidence that Alli can flourish under Mourinho, as following the 57-year-old’s appointment as Tottenham’s manager in November of last year, Alli went on to score seven goals and provide five assists over his 28 appearances under the Portuguese boss in the 2019/20 season.

So, Alli has proved he can be a valuable asset to Mourinho’s side in the past, it would just seem that the Portuguese manager has, for whatever reason, lost faith in the midfielder.

As such, in our opinion, it would be well worth Mourinho doing everything in his power to try and give Alli’s form the kickstart it requires before writing him off completely at Tottenham.