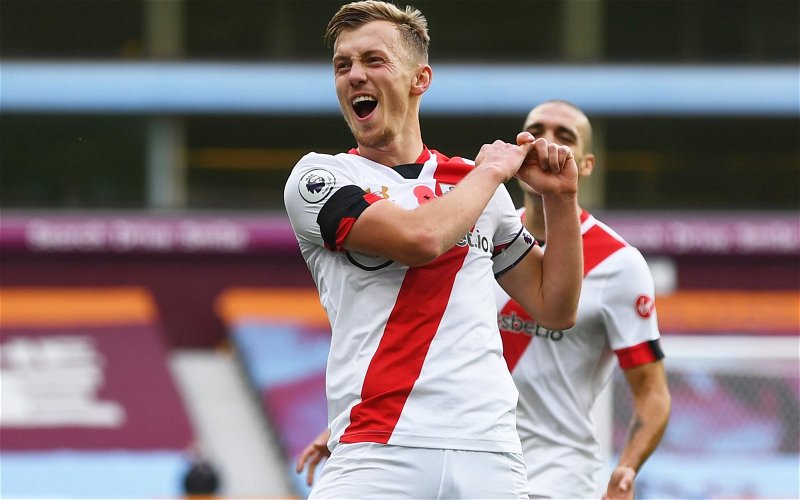 Chris Sutton has been speaking on a recent edition of the BBC’s Football Daily podcast about the weekend’s Premier League games.

One of the topics that the former Celtic striker spent some time on was the performance of James Ward-Prowse against Aston Villa in Southampton’s 4-3 win at the weekend.

The 26-year-old scored two free-kicks to take his tally to three league goals for the season and earned a sublime match rating of 9.22/10 (as per WhoScored).

This led Sutton to heap praise on Ward-Prowse, and it seems as if, according to the pundit, he is liked by England boss Gareth Southgate.

He said: “[He’s] such an important player for Southampton. His technique from free-kicks has been so good for a long time. How he can generate the pace to get it up and down over the wall is incredible.

“He’s a really good footballer, isn’t he, a versatile footballer, Gareth Southgate rates him highly. He’s been in the [England] squad now for a while.

“For Southampton, he’s a player now who I think all the players there look to.”

Yes, he doesn't get enough

No, he gets enough

TIF Thoughts on Ward-Prowse and Sutton’s thoughts on him…

Sutton mentions the fact that Gareth Southgate rates the Southampton man, but he only has four caps for his country, so maybe he doesn’t rate him that much – though he has been part of the last two England squads.

Certainly, Sutton likes Ward-Prowse, and you can see why with his ability from dead balls, as out of his 25 Premier League goals for Southampton eight of them have been direct free-kicks, which is an impressive record.

In nine Premier League seasons for the Saints, this is Ward-Prowse’s best league season so far in terms of his average rating, and if Sutton is to be believed, the England manager is quite fond of him as well.

So, it will be interesting to see if Ward-Prowse can keep up this form and gain more England caps.