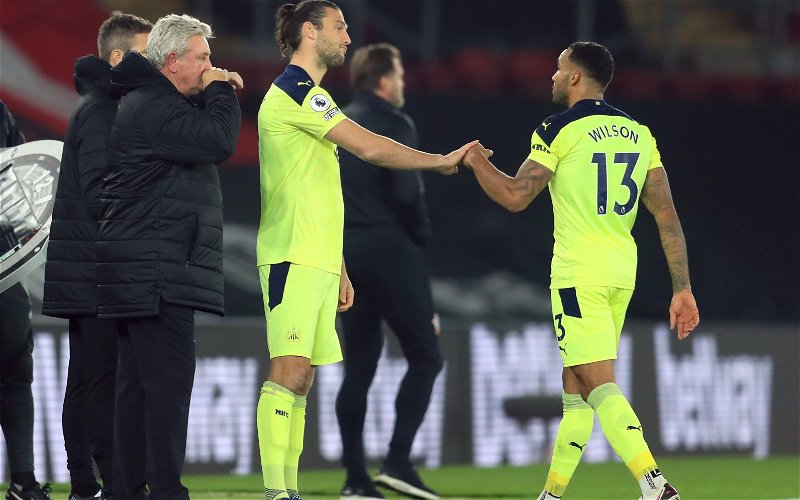 A lot of Newcastle United fans have replied to a post from Luke Edwards that has an injury update on Callum Wilson after the Toon’s striker was taken off during their 2-0 defeat to Southampton.

After the game, it was confirmed that the 28-year-old had injured his hamstring, and now Edwards is reporting that it isn’t too bad, and though he does not give a timescale, it seems to be a lot better than first feared.

There is now an international break, which means that Wilson will have time to recover for Newcastle’s next match with Chelsea, but these Toon fans want him rested for that game.

So, what did these Toon fans think of Edwards’ tweet on Wilson?

No point playing him against Chelsea when we have Palace and Villa after. Then again wouldn’t be surprised to see either team destroy us ?.

That’s until Bruce risks him and he’s out for longer ????

Do you think Wilson, if fit, should play against Chelsea?

Since signing for the Toon in the last transfer window for £20m, Wilson has scored six Premier League goals and has also provided one assist, which means that out of the ten goals Newcastle have scored, Wilson has been directly involved in 70% of them.

This post from Edwards continued to draw Newcastle fans’ attention, who were relieved that Wilson’s injury is not too bad.

This is good news for Newcastle, and it is clear that many of their fans are happy that their striker’s injury is not that bad.

However, some do not want him to be risked against Frank Lampard’s men, but given his goalscoring record this season, might Bruce decide he is too important to leave out?

We will have to see what happens if he is even fit for that match.