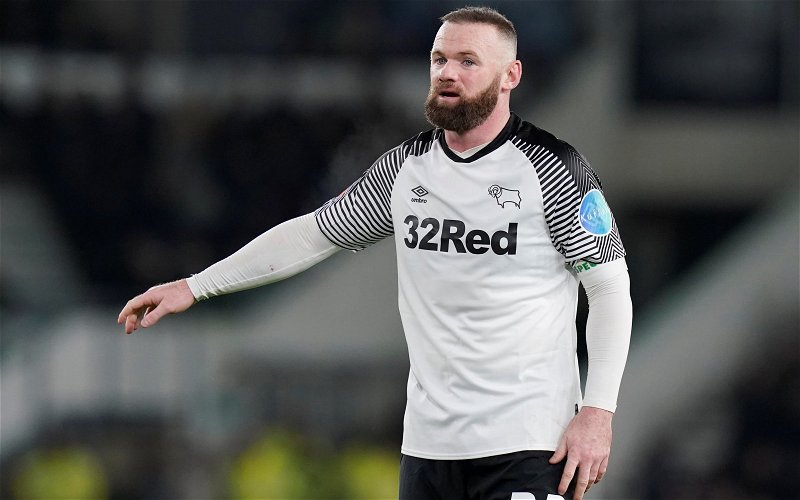 Derby County journalist Ryan Conway has been sharing his thoughts on Wayne Rooney and the possibility of the Englishman becoming the new manager at Pride Park.

This comes after Conway recently made an appearance on The Athletic’s Ornstein & Chapman Podcast where he spoke about a number of topics concerning the club.

On the subject of Rooney potentially becoming Derby’s new manager after the club recently parted ways with Phillip Cocu, Conway had this to say on the matter.

He said: “I think there is a feeling that Rooney wants the job. There was a couple of times where he, off his own back, did, not the post-match team talks, but they almost served as that after losses against Luton last year and Blackburn this year.

“[Rooney] came in as a player-coach and at the time, that role was always very oddly defined because he had no defined coaching role per se, he would help with the analytics stuff and the cutting up of video clippings and stuff like that, but it was never really a defined role that he is now going to be essentially co-managing with Liam Rosenior so I think he’s putting himself in the frame for it and there’s a feeling that he wants that job and if there is an appointment from within, it will be Rooney.”

Back in August 2019, it was announced that Rooney would join Derby from DC United in January 2020 as a player-coach on an 18-month contract (per BBC Sport).

Since arriving at Pride Park, the 35-year-old has made 33 appearances for the club in which he has managed to score seven goals and provide three assists along the way.

After Cocu’s departure, it has now been reported that Rooney could take charge of the club’s upcoming Championship clash against Bristol City.

Alongside Rooney, Shay Given, Liam Rosenior and Justin Walker could also overlook the weekend clash.

Do you think Rooney should be Derby's next manager?

In our view, if Rooney wants the manager position at Derby, as Conway suggested in the podcast, it would make sense for the club to give him the job seeing as he knows the players and the club well.

However, with the club currently sat rock-bottom of the Championship table it could be a big ask for Rooney to take charge for the rest of the season and get the club out of the relegation zone in what would be his first major managerial role.