Celtic pundit Colin Watt has recently made a claim about the club’s links with a move to sign Charlton Athletic youngster Alfie Doughty.

Watt was a guest on the latest episode of the ‘A Celtic State of Mind’ podcast and the panel discussed multiple potential transfers for the Bhoys.

One player that they focused on was Doughty and Watt believes that the youngster is still on Celtic’s radar and he is still a long-term option for the Bhoys.

Charlton had rejected two bids from Celtic for Doughty and the Bhoys’ second offer was believed to be in the region of £650,000. It was reported that the Addicks have been asking for a higher fee than what Celtic have offered.

Speaking as Monday’s deadline drew ever nearer, Watt believes that Doughty is still on Celtic’s radar and the Hoops will sign the youngster on a pre-contract deal in the winter.

“Just reading recently – it looks as if Celtic will be concentrating on getting him on a pre-contract in January, which I think will be a great deal for Celtic.”

He later said: “For me, the only one out of that list [of possible pre-contract signings] that would potentially still go on to be a Celtic player in the future would be Doughty.” 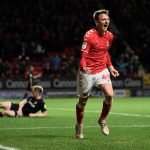 Doughty, currently 20, has already become a regular for Charlton and has made seven appearances in all competitions this season.

In the 2019/20 season, he made 29 Championship appearances for the club and directly contributed to five goals as well (as per Transfermarkt).

So, he already has the experience of playing regular first-team football and at 20, he might still improve as a footballer in the future.

He is also a pretty versatile player and can play in three different positions. If Celtic do sign him on a pre-contract deal in January, it might prove to be pretty good business from the Bhoys.