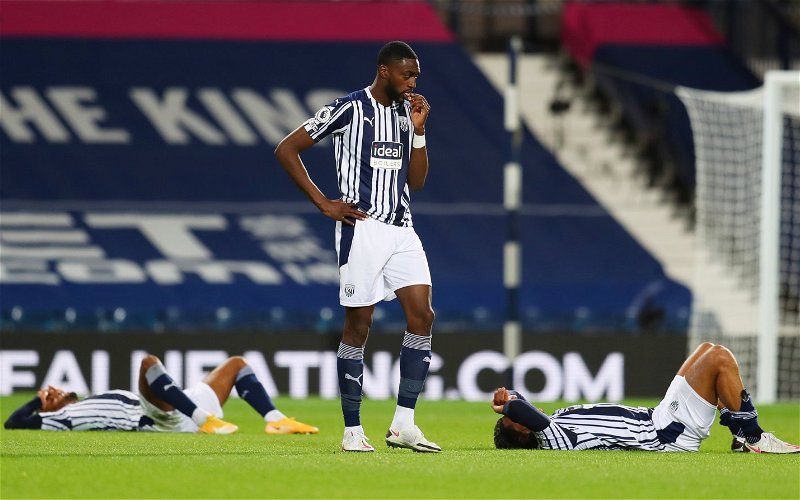 Speaking recently on an episode of the Football Writers Podcast, Richard Amofa discussed what he believes to be the issues at West Bromwich Albion.

Following a summer transfer window which saw the Baggies add players such as Karlan Grant, Grady Diangana, Matheus Pereira, Branislav Ivanovic and Callum Robinson to their ranks, West Brom’s season has not got off to the best of starts.

The club have lost three of their four Premier League fixtures thus far, including a 3-0 defeat to Leicester City, a 5-2 loss against Everton and a 2-0 defeat against Southampton.

Even in the one match Slaven Bilic’s side have picked up a point in this term, a 3-3 draw with Chelsea, they threw away a three-goal half-time lead.

And, with the Baggies currently sitting in 17th place in the league, Amofa discussed, on a recent episode of the Football Writers Podcast, what he believed the issues at the club to be.

He said: “I think the issue that West Brom have is – when they do get promoted – really strengthening in those key areas. It’s great showing faith in the team that did get them promoted, but, as we all know, the Premier League is a completely different challenge, [a] different animal, and, if they don’t add in that quality, especially defensively, they will get found out.

“We saw in the Chelsea game that they can provide a threat, they have got exciting players, the likes of the Romaine Sawyers in midfield and Callum Robinson up front, but, defensively, [they’re] probably a bit below the standard that we’re looking for at the top level – I think that’s been the issue. I think it’ll be a long season for them.”

Do you agree with Amofa's assessment of West Brom?

From Amofa’s comments, it is clear that the journalist is of the belief that, defensively, West Brom’s players are not good enough for the Premier League.

And, considering the fact that Bilic’s side have already conceded 13 league goals over just four fixtures this season, in our opinion, he may well have a point.

However, with Everton sitting top of the table, while Leicester are third and Chelsea are seventh, the argument could be made that the Baggies have faced some tough opponents in their opening matches, but, if the club do not tighten up over their next three league fixtures against 18th placed Burnley, 15th placed Brighton & Hove Albion and 20th placed Fulham, then this argument will become increasingly difficult to make.