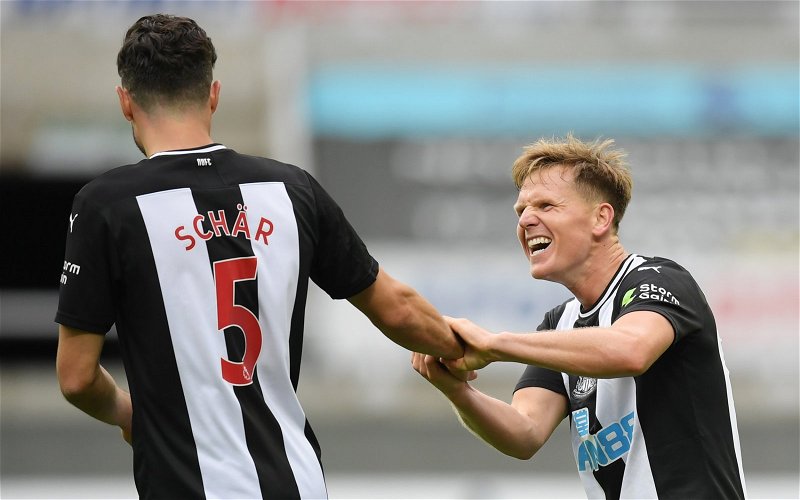 A lot of Newcastle United fans have replied to a post from their club that contains an injury update on Fabian Schar.

The tweet claimed that the shoulder injury the 28-year-old suffered against Burnley had been assessed, and he had been given the green light to play for Switzerland as he started in his country’s 2-1 loss against Croatia on Wednesday evening.

Schar had only just recovered from a shoulder injury suffered in July and played 55 minutes of the Toon’s 3-1 win over Burnley last Saturday before he was withdrawn with another shoulder problem.

However, it seems like he is fine, and Schar played 76 minutes against Croatia, but it was the news that the former Basel man had been given the all-clear to play for his country ahead of the game that pleased these Toon fans.

Do you think Schar should have played for Switzerland?

Yes, he was fit

Yessssssss. We need you Fabian!

Newcastle were without Ciaran Clark and Paul Dummett for the game against Burnley, while Jamaal Lascelles was also missing from the squad.

If Schar’s injury had been worse, they would only have had one fit natural central defender in Federico Fernandez.

Emil Krafth and Isaac Hayden have played at centre-back for the Toon before, but they are not natural there, so Schar being declared fit could be considered important.

However, Clark and Dummett were expected back in training this coming Monday, so Schar could have some competition for the Toon’s next game against Manchester United following the international break.

This news on Schar’s injury continued to attract the attention of these Toon fans, who are worried he will come back from international duty unfit.

He played one game for nufc this season because of injurys we had to throw him in the deep end, he got injured taken off, didn’t look good tbh, now he can go play for Switzerland, bit strange, hope he comes back ok

There’s no way he should be risked playing for Switzerland, what if he’s injured. It’s not a professional way of working at all.

I have a bad feeling about this

It appears Schar made it through against Croatia unscathed, so many Newcastle fans will probably be hoping that he can remain clear of the sidelines for the duration of the international period and is ready for the Toon’s next game against the Red Devils.