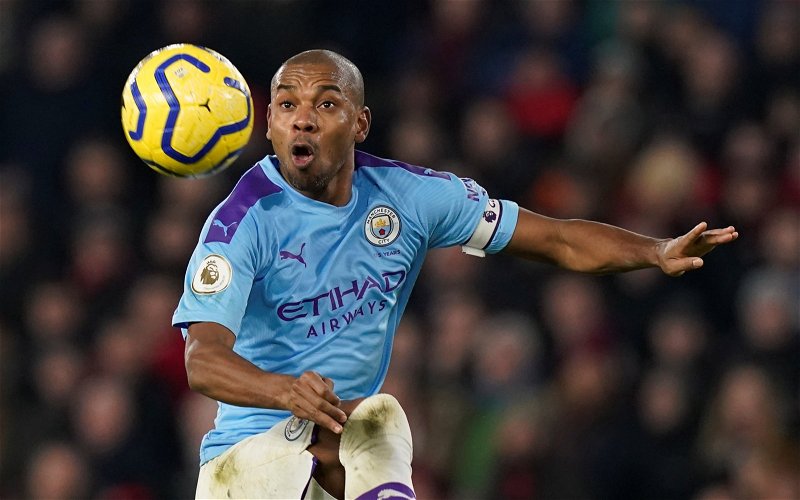 Jim Salveson appeared on a recent edition of the Football Social Daily podcast, during which Manchester City player Fernandinho’s leg injury, which is set to see him sidelined for ‘four to six weeks’ according to Sky Sports, was discussed.

The Brazilian came on as an 85th-minute substitute during his side’s recent 3-1 UEFA Champions League win over Porto but he then ‘limped off in injury-time’ of that game due to a leg injury.

During this recent edition of the Football Social Daily podcast, Salveson shared that he anticipates Fernandinho is going to be “a massive miss” for Pep Guardiola’s side now that he is set to spend some time on the sidelines and he pointed the finger of blame at the club’s “lack of good recruitment” for leaving them in this situation where the 35-year-old’s injury “is going to have” a significant impact on the team.

“Fernandinho is now 35, they’ve known he has been a player coming to [the] end of his career for the last two seasons they’ve been looking for replacements, they bought in Rodri who looked like he was going to be a competent replacement for Fernandinho but he’s not looked 100% convincing yet.

Will Fernandinho be a massive miss for City?

Meanwhile, so far this term, the £3.6m-rated man has played in six of City’s seven competitive games, so it certainly seems that despite Salveson viewing the 35-year-old Brazilian as a player who has been approaching the “end of his career” for a while now, it may be fair to say that he has played a fairly significant role for Guardiola’s side in recent seasons.

So, it will be interesting to see how much of an impact this injury does have on City over the coming weeks. If it does have a big impact on the club, as Salveson anticipates it will, then perhaps he is right to suggest that City’s failure to reduce the importance of Fernandinho’s role in the squad to a large enough extent in recent seasons should then receive some criticism.