Leeds United: Podcaster calls for Rodrigo to start versus Wolves

Co-presenter of the Talking Shutt podcast, known as Wraggy has been discussing whether or not Rodrigo should start in Leeds United’s upcoming fixture versus Wolverhampton Wanderers in the Premier League.

The Spaniard joined the Whites back in August in a deal reportedly worth £26m from Valencia, a club record fee at the time (as per BBC Sport). Since his arrival, the striker has made four appearances in the Premier League, scoring his only goal in the game versus Pep Guardiola’s Manchester City at Elland Road (as per Transfermarkt).

Despite coming on as a second-half substitute that day, Rodrigo’s display earned him an impressive performance rating of 7.33/10 (as per WhoScored). Having impacted the game significantly that day, it appears the podcaster believes he warrants a starting place against Wolves on Monday night. Here is what he had to say:

“If I was in charge, I’d start him, I think he’s been the difference every time he has come on.

“[Although he hasn’t started much up until now] with it being an international break, it feels like a bit more of a natural reset.”

Would you like to see Rodrigo start ahead of Bamford versus Wolves? 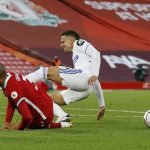 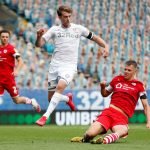 Despite making such a significant investment in the forward over the summer, Marcelo Bielsa has up to now, kept faith primarily in Patrick Bamford as the club’s centre-forward and it has to be said, the 27-year-old has proved his worth, netting three times and providing his teammates with two assists in his four appearances so far (as per Transfermarkt).

Wraggy, when discussing the £27m-rated Rodrigo, didn’t make it clear whether he would like to see him start ahead of Bamford or alongside him, but regardless of what the podcaster’s view is, we will have to wait until Monday to see which decision Bielsa takes.