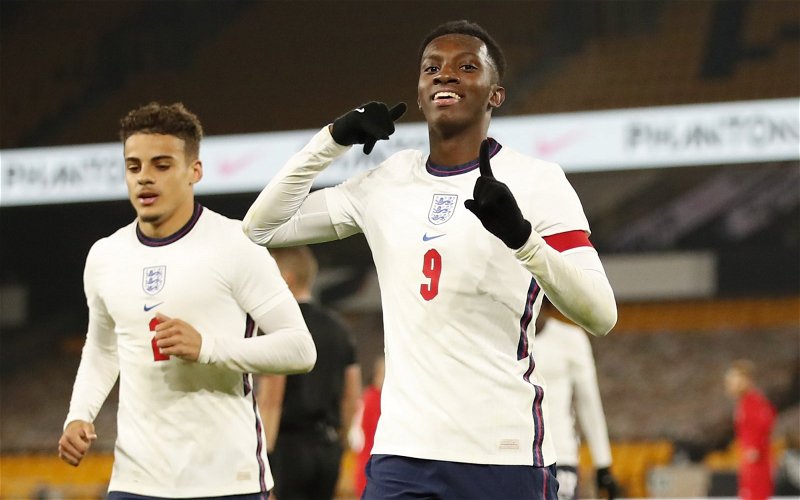 Plenty of Leeds United fans have flocked to a tweet that was recently posted by ex-Leeds loanee and current Arsenal forward Eddie Nketiah after he became the new record goalscorer for England’s U21s when his late goal versus Turkey’s U21s on Tuesday helped the Young Lions to secure a 2-1 win and a place in next year’s U21 European Championships.

Nketiah missed a penalty in this game before he went on to score England’s second goal of the contest, which was also the 14th goal that he’s scored for England’s U21s in just 12 appearances, taking his tally for the Young Lions past the previous record which was held by Alan Shearer and Francis Jeffers.

So, what did these LUFC fans make of Eddie Nketiah’s tweet?

Nketiah spent part of last season on loan with the Yorkshire-based club, scoring five goals and making one assist in his 19 appearances in all competitions during his time at Elland Road and plenty of the Leeds fans who replied to this tweet took this opportunity to congratulate the ex-Leeds loanee.

You are right, Bielsa is good. ?
Congrats Eddie

Did Nketiah make a positive impression on you during his time at Leeds?

As can be seen in these Whites fans’ replies to this tweet, it seems as though Nketiah left a positive impression on plenty of Leeds United supporters during his loan spell with the club and it is nice to see some of the Yorkshire-based club’s fans congratulating their former loanee despite the fact that he no longer plays for their club.