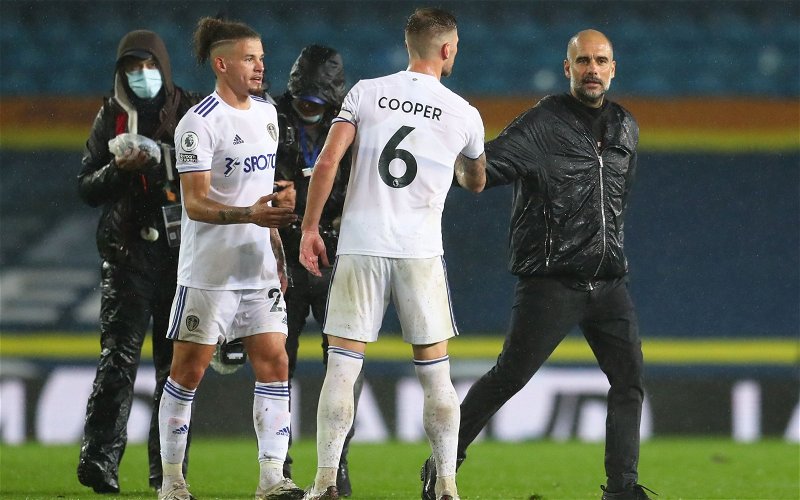 During the most recent edition of the Ranks FC podcast, Jack Collins, Sam Tighe and Dean Jones discussed every Premier League captain and they spent some time talking about Leeds United skipper Liam Cooper, who Collins was full of praise for.

Cooper has been a Leeds player since the summer of 2014. Prior to the current campaign, he had just two Premier League appearances to his name, with the 29-year-old having spent the majority of his career playing in the Championship.

Cooper has also earned the joint-second-highest overall WhoScored rating (7.17) of any Whites player in the Premier League this term and Collins praised the centre-back during this recent edition of the Ranks FC podcast, declaring that he thinks Cooper is a “crucial” member of Marcelo Bielsa’s side.

He said: “I think Liam Cooper is a very, very good footballer and I think the fact that Leeds have struggled when he’s not been in the side is testament to the fact that he is actually crucial – not only on a spiritual level, in that [Sergio] Ramos-esque kind of thing – but actually, technically, bringing the ball out, playing this Bielsa system, he’s a very, very good footballer.”

Is Cooper a crucial player for Leeds?

TIF Thoughts on what Collins had to say about Cooper…

Cooper has been absent for three of Leeds’ six Premier League games so far this season. He sat out both of the Yorkshire club’s last two games due to an injury that he picked up during the most recent international break, while he also missed the Whites’ Premier League season-opener versus Liverpool in September due to injury.

Leeds haven’t lost in the top-flight this term with Cooper on the pitch but they lost two of the three games in which the Scottish defender didn’t play and it’s clear from what Collins had to say that he thinks this is no coincidence and is a sign of how important the centre-back is for Bielsa’s side.

We feel that the podcaster may be right in saying this, as the defender’s impressive WhoScored stats back up this claim that he is a very important player for Leeds, so hopefully, for the Whites, they won’t have to wait much longer to see Cooper return to full fitness.