Pundit Kevin Graham has recently made a claim about Celtic striker Leigh Griffiths and his situation in the club’s first team.

Graham was a guest on the latest episode of the A Celtic State of Mind podcast and the panel discussed multiple issues involving the Bhoys. They also focused on the situation of Griffiths and what the future might hold for the Scotsman. Graham believes that the striker is ‘further and further away’ from the Celtic first team and he feels that Griffiths won’t be at Celtic when the transfer window shuts.

Griffiths is yet to play for Celtic this season and Neil Lennon confirmed last month that the striker was a couple of weeks away from recovering from an injury and wouldn’t be loaned out by the Parkhead-based club. The Scotsman is currently valued at £1.8m.

Graham believes that Griffiths is going ‘further and further away’ from the Celtic first-team and he doesn’t see a future for him at Parkhead anymore.

He said: “Every week goes by and every week, he doesn’t get anywhere near the squad and he doesn’t seem to be getting anywhere near fitness. It seems further and further away. When you look at the strikers that did come on at the weekend, [Mohamed] Elyounoussi also ended up playing through the middle.

Will Griffiths leave Celtic this summer? 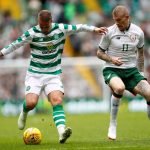 “Getting back to Leigh, I don’t see him being even that fourth-choice striker. [By] the time we get to October the 5th, Leigh Griffiths will no longer be a Celtic player.”

Griffiths, though, was pretty impressive for the Hoops in the second half of the 2019/20 campaign. He found the back of the net seven times and racked up three assists in the Premiership between January and the end of March for the Bhoys – perhaps made more impressive by the fact he had missed multiple games due to injury earlier in the season.

It shows that Griffiths can still be an important player for Celtic whenever he comes back to first-team action for the Hoops. So once he returns to full fitness, he might add some more goals to the side and Celtic fans can only hope that he replicates his form from the latter part of the 2019/20 season.