Newcastle United fans have taken to Twitter to slam the performance of Joelinton in the 1-0 win against Blackburn Rovers on Tuesday night.

Ryan Fraser’s goal was enough to see the Toon through to the third round, where they will face League Two side Morecambe away from home. Although Joelinton had a goal disallowed during the game, Toon fans were seemingly less than impressed with his overall performance against Tony Mowbray’s side.

The 24-year-old joined the Magpies from Bundesliga side Hoffenheim last summer in a club-record move, but seriously struggled in his debut campaign with Steve Bruce’s side, scoring just four goals in 44 appearances in all competitions (per Transfermarkt). The Brazilian struggled once again on Tuesday evening, picking up a 6.5/10 rating for his performance, which was the joint-worst of any Toon player who started the game (per WhoScored).

Should Newcastle get rid of Joelinton? 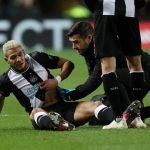 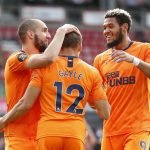 A sample of tweets from Newcastle fans slamming Joelinton can be seen in the tweets below.

I don’t agree with a manager coming out and publicly giving out about his player in public that doesn’t help at all imo. I just feel like joelinton isn’t good enough it’s such a shame I just feel when you compare him to miggy I think there is actually a difference imo #NUFC

Time for #NUFC to build upon the early season optimism and bring in another forward to share the burden with Wilson. Joelinton not the answer and clearly out of his depth.

Plenty of Newcastle fans continued to slate Joelinton on Twitter.

I won’t debate with anyone that defends Joelinton.

Lad is an absolute donkey and one of the most expensive flops in Premier League history.

Joelinton was a disgrace tonight.

Joelinton should never get to wear the shirt again.

What an absolute waste of space Joelinton is, I can only presume when he was being scouted it was done by Mr Magoo, time to get rid #nufc pic.twitter.com/2ANoxAZ80q

Joelinton.. does not have a position he is shocking, bang average championship player, not his fault we payed 40 million, it’s ours, in today’s market we would be lucky to get 10 million for him

Callum Wilson made Joelinton look like a league 1 player after tonight’s game!! Get rid I say!! Surely worth MA splashing some cash now!! Dembele or Milik for me!! We need a RB a CB and another striker! Max Aarons from Norwich would be a class addition #nufc @NUFC

Overall, it seems as if a lot of Toon fans are convinced that Joelinton simply isn’t good enough.