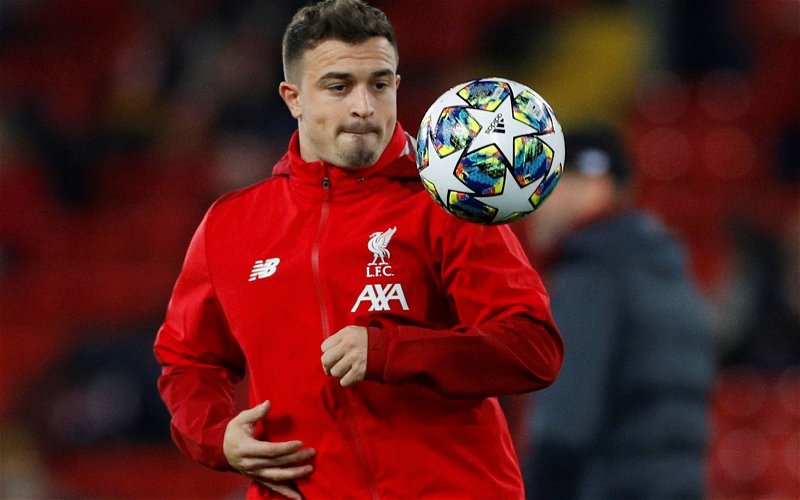 Liverpool journalist Paul Gorst has shared his thoughts on Reds winger Xherdan Shaqiri and his future at the Merseyside club.

This comes after Gorst recently made an appearance on the Liverpool Echo’s Blood Red Podcast where he talked about a range of topics concerning Jurgen Klopp’s side at the moment.

On the subject of Shaqiri, Gorst had this to say on the winger and his immediate future as a Liverpool player.

He said: “We’ve still got Xherdan Shaqiri there who can say he could be like a new signing and I think everyone would groan if that was the phrase trotted out by Jurgen Klopp, but he’s someone who barely played all season.

“I think he’s played about five minutes since January and someone who possibly might have his own personal point to prove if he stays beyond that October 5th deadline, so we’ll wait and see but for me, I do think that even if Shaqiri stays and he says all the right noises about looking to kick on and put last season behind him, personally I do still think Liverpool still do need someone who can play across that front three in a number of positions, but the issue as it ever seems to be is, can they afford that at this stage?”

Shaqiri signed to Liverpool back in 2018 from Stoke City in a deal worth a reported fee of £13.23 million. Since then, the 28-year-old has made just 41 appearances for the Reds across all competitions, scoring seven goals and providing five assists.

Unfortunately for Shaqiri, who is currently valued at £14.4 million, he has suffered his fair share of injuries that have kept him in and out of action for Jurgen Klopp’s side.

As Gorst mentioned in the podcast, Shaqiri only managed to play a total of 182 minutes of Premier League action for Liverpool throughout the 2019/2o season.

What should Liverpool do with Xherdan Shaqiri this summer?

While Shaqiri didn’t feature much for Liverpool towards the end of their 2019/20 Premier League campaign, it will be interesting to see if he remains at the club for next season and if he will get more game time there or not.