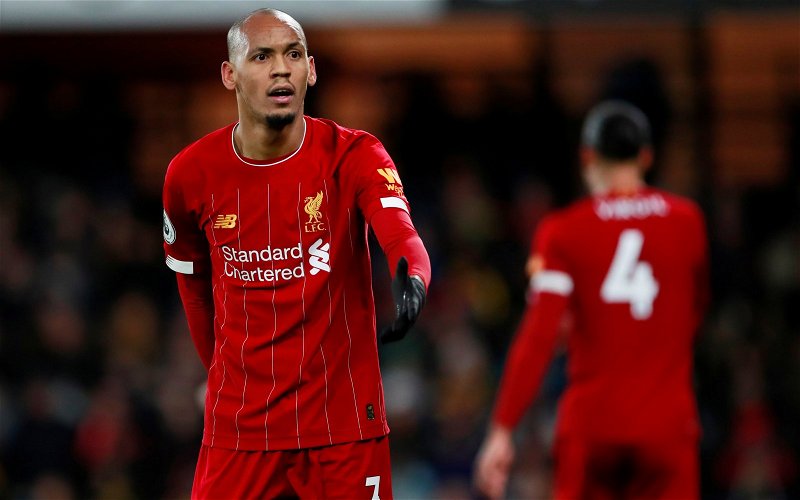 Liverpool journalist Paul Gorst has been sharing his opinions on playing Reds star Fabinho in the centre-half position instead of as a defensive midfielder.

This comes after Gorst recently made an appearance on the Liverpool Echo’s Blood Red Podcast where he reflected on Liverpool’s Community Shield shootout defeat to Arsenal at the weekend.

On the subject of Fabinho, who played as a centre-half throughout the match at Wembley Stadium, Gorst shared his thoughts on playing the Brazilian in that position.

He said: “I don’t like it one bit, if I’m honest. I don’t see why you’d possibly take out one of your best midfielders, one of the best defensive midfielders in the Premier League, and throw him in a position that he’s not accustomed to. It just seems pointless to me.”

Liverpool signed the 26-year-old back in the 2018 summer transfer window from AS Monaco for a fee of £40.5 million.

Since then, the Brazilian, who is currently valued at £50.4 million, has made a total of 81 appearances for the Reds across all competitions in which he’s managed to score three goals and provide six assists.

Throughout his playing career, Fabinho has predominantly played as a defensive midfielder but has made a handful of appearances playing as a centre-half and a right-back (per Transfermarkt).

During the match against Arsenal, Fabinho played as a centre-back alongside Virgil van Dijk, in which he earned himself a match rating of 6.85/10, making him Liverpool’s third-highest-rated player on the day (per WhoScored).

Do you have any problem with Fabinho playing as a centre-back?

Despite the fact that Gorst doesn’t seem happy with Fabinho playing at centre-half, his performance against Arsenal showed that he is more than capable of doing a good job for the Reds in that position.

Heading into the 2020/21 season, it’ll be interesting to see if Jurgen Klopp decides to use Fabinho as a centre-half at any point again during the campaign.