Charles Watts, the Arsenal correspondent for Goal, has been discussing the future of Lucas Torreira during a recent YouTube video.

The Uruguayan has been linked with a move to La Liga recently and it’s understood the midfielder is wanted by the Atletico Madrid boss Diego Simeone.

Arsenal signed the 24-year-old from Sampdoria back in July 2018 in a deal reportedly worth £25.79m (as per Transfermarkt) but it seems he could be on his way out of the Emirates Stadium sooner rather than later according to the journalist. Here is what he had to say:

“Lucas Torreira is very close to an Arsenal exit, Arsenal and Atletico are understood to be talking. It seems like one of the issues at the moment [is that] Atletico need to move someone on before they can bring Torreira in. It’s looking like it’s going to be a loan for Lucas Torreira with an option included in that to buy at the end of the season.”

“Obviously, it’s Atletico Madrid, so everyone is putting two and two together saying Arsenal surely get Thomas Partey out of the deal – it would make sense, but from all accounts at the moment, that is not really how this deal is operating. It’s not making any difference, in terms of Atletico’s stance on Thomas Partey – their stance is still: pay his release clause.”

Although Watts claims that the player is ‘very close’ to securing a move away from the Emirates, it appears there are still some issues that need to be resolved before a deal taking Torreira to Spain can be concluded.

Perhaps more significantly, however, in the eyes of the Arsenal fans, the journalist doesn’t believe Torreira going the other way will make the slightest bit of difference with regards to the potential of Thomas Partey moving to North London.

Do you expect Arsenal to meet Partey's release clause before the end of the window? 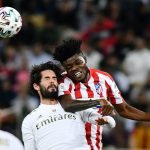 Judging by the above, it seems that if the Gunners are set on bringing the Ghanaian to Arsenal they will need to trigger his minimum fee release clause which is believed to be set at £45m.