Supporters of Leeds United have been reacting to a sponsorship announcement that was posted to social media by the club.

On Monday morning, the Whites shared a link to a post on their website which revealed that Clipper Logistics will become the club’s ‘official training kit sponsor and logistics partner’ (per Leeds United).

According to the report on the Yorkshire outfit’s website, Clipper has already had a four-year partnership with the Whites and the new deal will extend that for a further two years.

The deal will see the Clipper logo on the front of all of the side’s training kits for ‘training sessions, press conferences and warm-up exercises before matches’.

Lots of fans reacted to this announcement after it was shared to social media.

? #LUFC are pleased to confirm a new sponsorship deal with @ClipperPlc, who will become our official training kit sponsor and logistics partner

Announcing this at 6am because there’s more to announce during the day? #AnnounceBenWhiteFreed

Great deal, and no room for speculation when posting it that early. Well it’s only the first day of the week!

And so it begins….

Fantastic news, hope this means we can remove the East Stand sponsorship now which looks League One. https://t.co/v1l9kwRuJ7

One announcement which Leeds supporters will likely be anticipating is that of Marcelo Bielsa’s new contract, as his deal with the club expired earlier this summer (per Transfermarkt).

However, the latest report from Phil Hay for The Athletic stated that the ‘understanding’ was that ‘Leeds and Bielsa are essentially agreed on the terms of an extension for next season’.

Do you believe that Marcelo Bielsa's new contract will be announced in the next few days?

Yes, I think it's all sorted

No, I'm worried about it 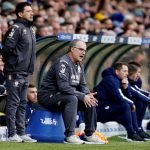 Is this the big announcement

Bielsa with the new shirt ?

As can be seen in these responses from Leeds supporters, many of them are clearly in anticipation of further announcements being made by the Whites soon.