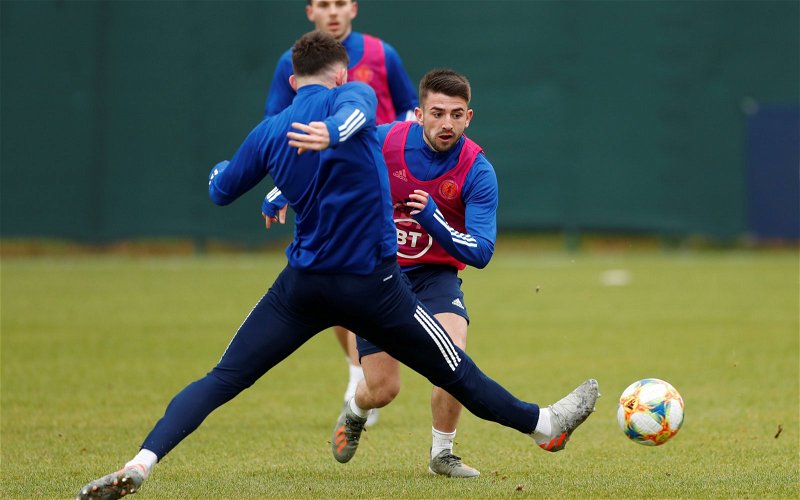 Celtic fans on Twitter have been responding to the latest video of Hoops full-back Greg Taylor.

This comes after the official Celtic Twitter page shared a post that contained a video of Taylor speaking to the club’s media after their 1-1 draw against Kilmarnock in the Scottish Premiership at the weekend.

In the video, Taylor describes the result as “disappointing” before claiming that his side didn’t defend well enough in the build-up to Kilmarnock’s goal and didn’t create enough of their own attacking opportunities.

This post from the official Celtic Twitter page then gathered a lot of replies from Hoops fans who were quick to share their thoughts on the match and Taylor’s comments on it.

?? Greg Taylor gives his thoughts on the match. #KILCEL pic.twitter.com/zcw2yD8X6x

One of the two guys who had a bit of urgency today and he was subbed along with frimpong, the other. Didn’t make sense to me.

Celtic took the lead just after the 10-minute mark through Ryan Christie before a penalty from Chris Burke levelled the scoreline in the first half (per WhoScored).

Still the best left back in the league

Taylor’s performance in the draw against Kilmarnock earned him a match rating of 6.6/10, making him Celtic’s fifth-highest-rated player on the day (per WhoScored).

One of the few with pass marks today.

Now that the official Celtic Twitter account has shared this video on their page, this paved the way for lots of Hoops fans to share their thoughts on the match and Taylor’s performance.

There were some Celtic fans responding to the post who decided to slate Taylor for his display in the draw.

Biggest passenger in the game today

He is trash bolo all day over him

Did Greg Taylor have a good game against Kilmarnock?

Ask him if his right foot works

It appears that Taylor’s performance in the match against Kilmarnock has split this group of Celtic fans. The hope for everyone at the club now will be that they can move on from this match and focus on winning their upcoming league fixture against St. Mirren in midweek.