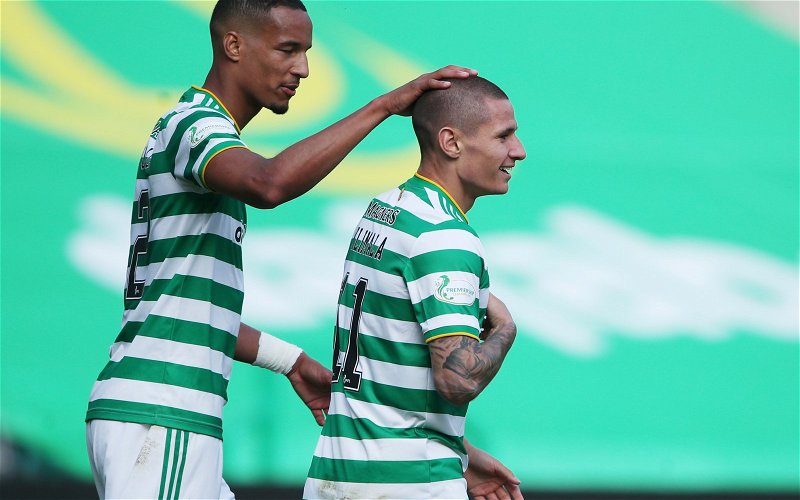 During the Hoops’ recent 1-0 victory over Dundee United, the 22-year-old attacker came on as a late substitute for Odsonne Edouard (per BBC).

For his short cameo appearance in the clash, Klimala was awarded a weak 6.18/10 match rating by WhoScored.

However, in the latest episode of Four Tims and a Podcast, in which they discussed the 1-0 victory, Darren heaped praise on the Polish attacker. (11:41)

He said: “Patryk Klimala played really well when he came on, I think. In terms of seeing out the game, especially in injury time, he got the ball a couple of times and he just took it and was able to travel 20 yards.

“[He] won a free-kick with it as well which essentially ended the game.

“So, if we are to move to a two up front [against Ferencvarosi TC] and [Albian] Ajeti’s not match-fit, I’d have absolutely no problems throwing Klimala up top with him.

“It’ll be interesting to see how we do line up on Wednesday.”

As can be seen in what the podcast pundit had to say, he was impressed with Klimala on Saturday and would not mind seeing him start in their Champions League qualification match.

Do you think Patryk Klimala should start on Wednesday?

So far this season, the £3.24m-rated forward has shown himself to be fairly capable in the Premiership as he has bagged one goal in 32 minutes of league action (per Transfermarkt).

Furthermore, in the match in which he bagged a goal for the Hoops – the 5-1 victory over Hamilton Academical – Klimala earned an impressive 7.32/10 match rating (per WhoScored).

So, it may not be a bad suggestion for the Polish attacker to get a start against Ferencvarosi.