Spurs fans on Twitter have been reacting to the latest news on Inter manager Antonio Conte, and how it may potentially impact the Lilywhites’ reported interest in Milan Skriniar.

It was confirmed by Italian journalist Fabrizio Romano that the Italian manager would be staying with I Nerazzurri next season, which could prove to be a boost in Spurs’ reported interest in Skriniar, with TuttoMercatoWeb suggesting earlier in the transfer window that the Slovakian defender was not fundamental to Conte’s plans.

However, a swap deal has also been suggested between Skriniar and Tanguy Ndombele, and with Conte staying in charge of the Serie A side, perhaps he will push to complete the signing of the Frenchman, in a deal which would see his centre-back head to North London.

That has led to plenty of Spurs fans wondering what the knock-on effect of this development could mean for their midfielder and the chances of the club potentially welcoming Inter centre-back to the club.

Last season in Serie A, the 25-year-old made 32 appearances in the top-flight; averaging a less than impressive 6.61 rating for his performances (per Whoscored), so you can perhaps understand why Conte is seemingly keen to move him on.

Do you think a Ndombele/Skriniar swap deal will happen? 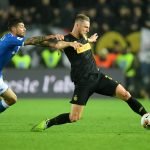 Reaction from Spurs fans to the news on Conte, which was shared by TranSPURS on Twitter, and what it may mean for Skriniar and Ndombele, can be seen in the tweets below.

No this is bad, probably means Ndombele will go

It’s the hope that kills you

Lots of Spurs fans seem to think that Conte staying means Inter will complete a swap deal for Ndombele.

Huge L in keeping Ndombele though

It’s also a boost for them getting Ndombele who you just know will be used in a swap, Who we now need to replace. By filling one hole we’re leaving another vacant.

We surely have to peruse this now, ndombelle not interested, swap plus £10-15 million and we move!

Overall, whilst some Spurs fans seem keen on the idea of signing Skriniar, others seem disappointed that Ndombele could potentially be leaving.