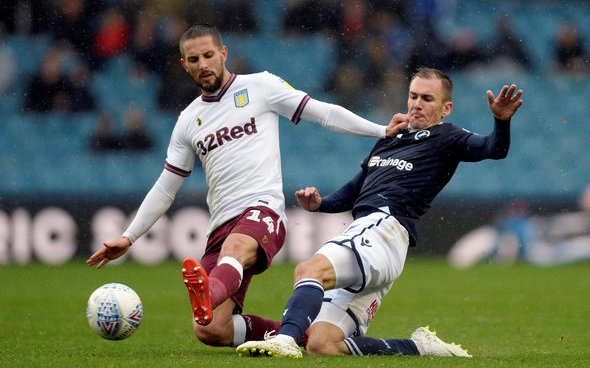 Aston Villa podcaster Dan Wiseman has been sharing his thoughts on Villa midfielder Conor Hourihane and the possibility of him leaving the Birmingham club this summer.

This comes after Wiseman recently made an appearance on The Villa Filler Podcast from a Villa-themed YouTube channel called Heart of The Holte where he spoke about a range of transfer-related topics concerning Dean Smith’s side at the moment.

After it was recently reported in Turkey that Hourihane’s agent has offered him for a move to Besiktas or Trabzonspor this summer, Wiseman shared his thoughts on the possibility of the midfielder leaving Villa for a move to Turkey.

“Everyone talks about the value that we got for John McGinn, but you know, three years ago we signed Conor Hourihane for £2 million and I struggle to think of a better bit of business that this club has done in the last 5-10 years than that in terms of the goals and assists and the crucial moments that he’s given us.

“I still think he’s got something to offer to this club, he’s earned his right to stay. I don’t think he’ll be making the move to Turkey. If he did I’d be very surprised.

“I’d wish him all the best, apparently, the weather’s very nice out there at this time of year, but stick to the Premier League please Conor you still got something to offer us.

“I’ve still got to see a few free kicks fly over the wall and into the back of the net before you wave goodbye.”

Villa signed Hourihane back in the 2017 January transfer window from Barnsley for a fee of £3.15 million.

Since then, the Irishman, who is currently valued at £5.4 million, has gone on to make a total of 146 appearances for the Birmingham club in which he has managed to score 28 goals and provide 22 assists along the way (per Transfermarkt).

Would you be disappointed if Conor Hourihane left Villa this summer?

Given the low transfer fee the club paid for Hourihane and the amount of goals and assists he has delivered for Villa since his arrival, it’s safe to say the 29-year-old has been a successful signing for the Birmingham club.

It will be interesting now to see if Hourihane does end up leaving Villa this summer for a move to Turkey.