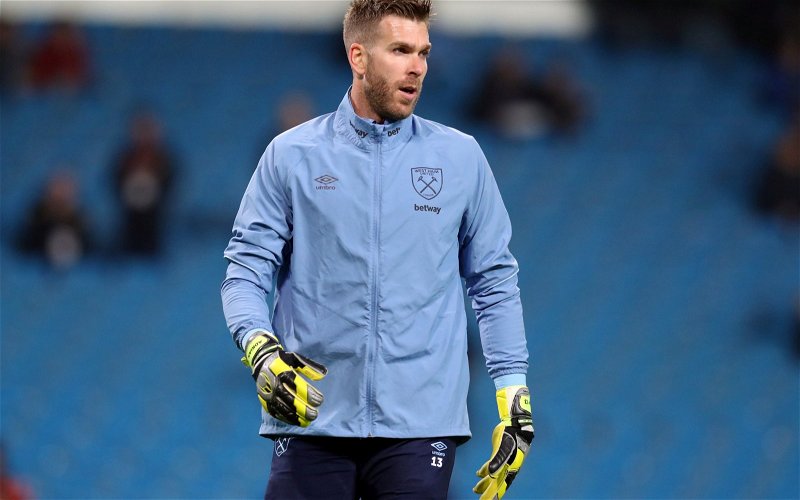 Sky Sports pundit Rob Green has been speaking on the latest episode of the Football Daily Podcast about West Ham United’s woes, and he feels that the injury to Lukasz Fabianski and letting Adrian go last summer have proved to be a killer for West Ham.

Green spoke about other things, but he spent a lot of time on the club that he made 241 appearances for and particularly focused on the Hammers letting Adrian leave last summer.

Here is what he had to say in full about West Ham and Adrian.

“Fabianski got injured, and Roberto came in, who’d replaced Adrian, who’s done this season so well at Liverpool, and he’s sort of proved himself there as a capable number two.

“You look at that decision to let him go, and you think at the start of the season you look at Lukasz Fabianski and say ‘fantastic keeper, he’s Player of the Season, he’s played every game for a number of years now, and he’s just going to play every game, so why keep Adrian?’

“Then something like that happens [injury to Fabianski], and just the whole confidence seemed to evaporate from the team.”

Green makes some interesting points about Adrian and Fabianski, and it is clear to see where he thinks everything went wrong for his former club.

Do you think keeping Adrian would have made a difference for West Ham?

Before the Hammers played Bournemouth away, the Irons were in 8th place and had only conceded seven goals.

However, in the league games he missed through injury, West Ham won just two.

Adrian, who is valued at £3.6m by Transfermarkt, has played 18 games and kept just three clean sheets for Liverpool this season.

He was at fault during Liverpool’s quarter-final defeat in the UEFA Champions League to Atletico Madrid.

So, it would seem that he hasn’t been that good.

However, he might have proved to be a better option than Roberto, who conceded 17 goals in eight Premier League games.

It is clear to see where Green thinks everything went wrong for West Ham, and it is difficult to disagree with him.