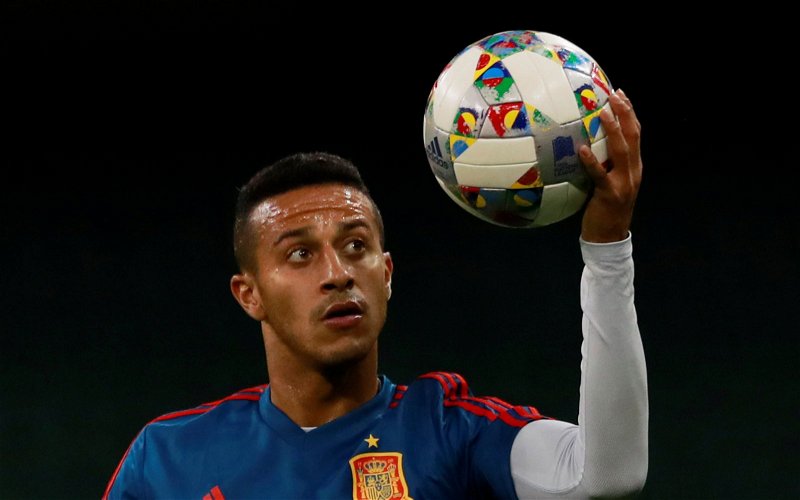 Christian Falk, head of football at German publication Sport Bild, joined Dean Jones and Jack Collins on a recent edition of Bleacher Report’s Football Ranks podcast to discuss some of the latest football transfer news and one of the topics of discussion that came up during this podcast was the possibility of Bayern Munich midfielder Thiago Alcantara moving to Liverpool.

Earlier this month, Spanish publication Sport reported that negotiations were at a ‘very advanced’ stage between the 29-year-old midfielder and the 2019/20 Premier League champions. This report claimed that ‘only the economics have to be worked out between the two sides’ for this deal to go through.

Thiago was one of Bayern’s best players during the 2019/20 season. According to WhoScored, the Spaniard earned an average overall rating of 7.47 from his 24 appearances in the German top-flight, helping the Bavarian side to win an eighth-straight German Bundesliga title.

However, Thiago’s contract is currently set to expire at the end of next season and Falk shared his thoughts on the possibility of Bayern cashing in on the in-form midfielder this summer amid alleged interest from Liverpool during his appearance on the latest edition of the B/R Football Ranks podcast.

Falk said: “Bayern Munich think that he is leaving because he didn’t extend his contract. The way he did it was not very gentleman-like.

“So I think he will leave but he has to [reveal] the club. I think he’s very sure that he has a club, I think we know the club, but the big question is: is the club paying the fee Bayern Munich is expecting?

“We were talking about Liverpool, they don’t want to spend so much money this year we already know, that’s why they missed [Timo] Werner, [Jurgen] Klopp would like to have him.

“So if a player like Thiago is on the market, perhaps they do it. They need a player in this position but, again, [it’s a] question of money and they have to bring [it].

“Somebody is trying to get the price a little bit lower, the other one higher, but indeed, there were no negotiations yet. Thiago is making it a big secret also in the club. His friends in the team [are] talking about Liverpool but they have to pay the price for him, and I think Bayern Munich [are] doing everything to sell him now because they don’t want to let him go for free next summer.”

Considering that the £43.2m-rated man’s contract is currently set to expire next summer, it may be understandable if Bayern are “doing everything to sell him” at the moment, as claimed by Falk.

However, even if the Reds are interested in Thiago, it has been reported that Liverpool are expected to have a relatively quiet summer transfer window this year, with the club’s manager Klopp pointing to the financial impact of the ongoing viral outbreak as a reason for why they may not be big spenders this summer. With that in mind, Anfield may not be the midfielder’s destination if he does leave Bayern this summer.