Leicester City manager Brendan Rodgers has issued an injury update ahead of the club’s next Premier League game against Arsenal.

Rodgers was recently interviewed on the latest episode of the Leicester City Football Forum podcast, and the Foxes boss was asked for injury updates as the club prepares to take on Arsenal in their next Premier League game on Tuesday. Rodgers revealed that the side does have concerns to address.

The Foxes got back to winning ways in the league at the weekend after beating Crystal Palace 3-0. Jamie Vardy scored a brace, while Kelechi Iheanacho also got a goal for himself.

While talking about the injuries in the side following the victory over the Eagles, Rodgers said: “I think James [Maddison] will still be a doubt for Tuesday, but we’ll see how he recovers. He wasn’t due to play against Everton but he had come through it and we were able to get 45 [minutes] out of him. So, we’ll see how that works over the next couple of days.

Do you think Maddison will be fit to face Arsenal?

Yes, he just has to play 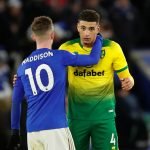 No, he won't feature

“Ben [Chilwell] has had an issue with his Achilles. So, we’ll see how that reacts again in 48 hours and Ayo [Perez] obviously got a knock on his ankle. So again, we’ll assess when we get in tomorrow morning and see how fit they are for Tuesday.”

So clearly, there are uncertainties about who Leicester will have fit for the game against the Gunners and all three of Maddison, Chilwell and Perez remain doubts for the clash.

As per WhoScored, Chilwell and Maddison are among the top seven for Leicester’s best performers in the Premier League this season. Maddison has picked up a rating of 7.34/10 – which is the second-best rating at the club. Chilwell, meanwhile, has a rating of 6.96.

This shows how important both of those players are to the Foxes. Perez has also picked up a rating of 6.81 in the season so far and reflects his importance to Rodgers’ team, too.

Leicester are currently third in the table, but fifth-placed Manchester United are only three points behind them. So this is a critical point of the season and dropping points at this stage could lead to Leicester dropping out of the top four.

Therefore, the injury updates about Chilwell, Maddison and Perez should concern Leicester fans as they’re important players and they can’t afford to miss them at this stage of the campaign.