Campbell spent a fair amount of time talking about the Toffees’ defence and was asked about Silva, who has been linked with a move to Goodison Park.

Here is what he had to say about the 35-year-old when asked what he thinks about a potential move for Silva:

“Thiago Silva has done it wherever he’s been; he’s a good, strong player, people talk about age – forget age.

“You need someone who can rally the troops, who can lead by example, I think that’s what’s missing from this Everton team – the leadership.

“So, the more players like that that come in and offer leadership, the better.”

It is clear that Campbell would like to see Silva at Goodison Park next season. 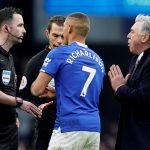 Everton have been linked with a move for the Brazilian international, who has 88 caps for his country and has also played in the UEFA Champions League on 77 occasions.

It is clear he has experience at the top level of the game, and is set to leave once his contract with PSG expires at the end of August, as per Transfermarkt.

The 35-year-old, who is valued at £4.32m, has also played under Ancelotti on 34 occasions during the Toffees manager’s time in the French capital.

Therefore, if Everton go for it, they would be signing a vastly experienced player who knows Ancelotti, so it will be interesting to see what they decide to do.