Crystal Palace: Club are in the race to sign Habib Diallo

Crystal Palace are in the race to sign the FC Metz striker Habib Diallo, according to Senegalese outlet Wiw Sport.

The 25-year-old centre-forward is said to be attracting interest from a number of Premier League clubs including the Eagles. Roy Hodgson’s top goalscorer this season is Jordan Ayew, with the Ghanaian striker having scored nine goals in the top flight (as per Transfermarkt.co.uk) but his only other current centre-forward option, Christian Benteke has managed just two goals in all competitions.

According to Transfermarkt.co.uk, Diallo is currently valued at £10.8m despite the original report suggesting Tottenham Hotspur are willing to offer the French club £45m for the Senegal international’s services.

Diallo has been at Metz since 2013 and having spent some time on loan at Stade Brest 29, he is now an established first-team player for the Ligue 1 side – starting in 93% of their league fixtures this season.

He is the club’s third-most consistent performer with an average performance rating of 6.97/10 (via WhoScored.com). The striker has managed to net 12 times in 26 Ligue 1 appearances despite his team having struggled down in 15th place up until the season was brought to a halt by the global pandemic, as well as producing three assists.

His current contract with Metz still has until June 2022 to run and interestingly, as per Transfermarkt.co.uk, he is comfortable in operating from the left-flank as well as through the middle.

Would you like to see Diallo come to Selhurst Park this summer? 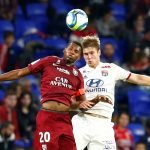 Given Roy Hodgson’s lack of regular goalscorers, Diallo seems like a good option. However, with the report suggesting Spurs are willing to offer in excess of £40m in their attempts to land the player, unfortunately for Crystal Palace, we think it seems possible that they could be priced out of the race to sign him.