Some Celtic fans have been talking about the latest transfer news linking them with a move for Manchester City goalkeeper Claudio Bravo.

Recently, Glasgow Live stated that Bravo is on a list of players that the Hoops could ‘make a move for’. Watford goalkeeper Ben Foster and Burnley’s Joe Hart are also on that list of potential goalkeeper signings for the club.

The former Barcelona ‘keeper’s current deal at Manchester City runs out at the end of the June, meaning he will be a free agent for the Bhoys to sign.

Hoops-related page CelticBible recently relayed this information (via The Times Chile) on Twitter. Many Hoops fans made it clear that they don’t want Bravo to join the club.

Absolutely NOT. Guy is an utter bombscare and for a professional GK , he is genuinely abysmal taking a passback. Better with the StMirrin keeper!

Would it make sense for Celtic to sign Bravo? 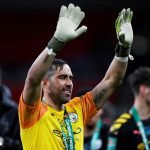 Better get the Forster deal done then… Bravo is heinous.

Bravo joined Man City from Barcelona in the summer of 2016. Before Barcelona, the Chilean had been at La Liga side Real Sociedad (via Transfermarkt).

Since arriving at the Etihad, the 37-year-old has made only 60 appearances over four seasons. This season, he has made 16 appearances, though just four of those have been in the Premier League, with a further two in the Champions League (via Transfermarkt).

The fact that Bravo isn’t currently a regular at City could be a reason why Celtic fans aren’t too keen on him. Many others also made their displeasure with the reports clear.

Hes shocking….would not have him near the club!!

These Celtic fans seem in agreement that the club shouldn’t sign Bravo. Considering how he’s far from a regular at the Etihad and that he is 37, signing the goalkeeper might not be a good idea for the Hoops.

They should rather concentrate on signing a much younger Fraser Forster, with the 32-year-old a regular between the sticks while on loan at the club this season.